How Much Does F1 Fuel Weigh? 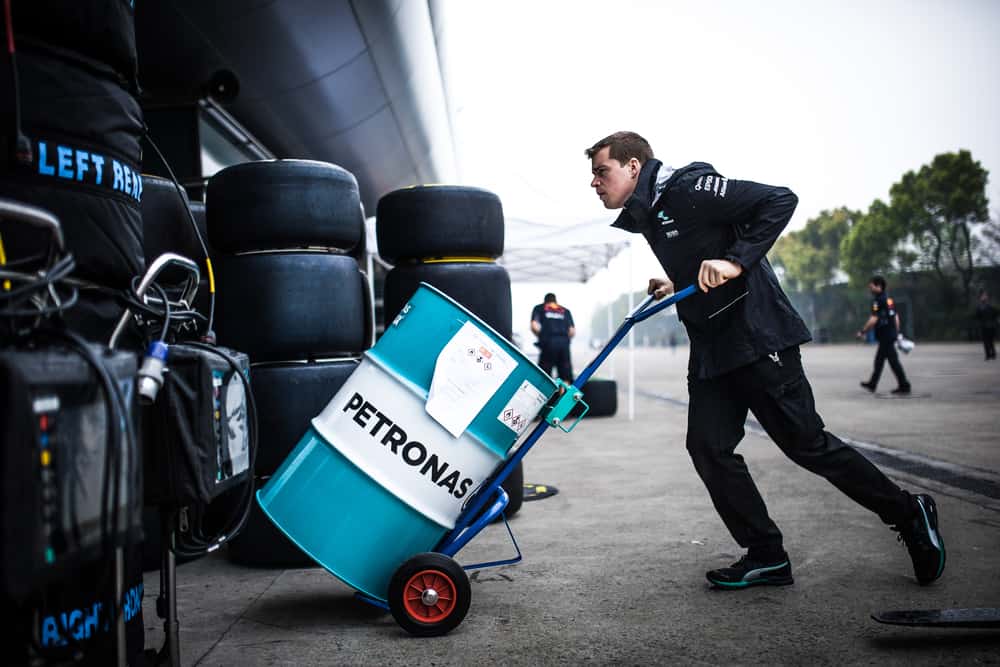 Formula 1 cars push the engineering limit as they speed around tracks at over 186 mph (300 km/h). As a result, you’d expect them to be gas guzzlers of note and use a lot of fuel. But, with cars no longer refueling during a race, I’ve always wondered how much fuel is put into the cars before a race starts and how much F1 fuel weighs.

A full fuel tank in an F1 car weighs around 242 lbs (110 kg). This must be put into the car before the race starts because, in 2010, F1 banned mid-race refueling for safety and financial reasons. There also needs to be enough left at the end so race officials can take a 1L sample.

Fuel is what gives Formula 1 cars life. It keeps them running, which means it’s a vital part of the sport. It also means that there are many rules related to fuel and refueling. So, read on to learn more about how much F1 fuel weighs, what it is made from, and the rules surrounding fuel usage in the sport.

How Much Does F1 Fuel Weigh?

Formula 1 cars cannot be refueled during races (more on that in a later section), so teams have to fill the cars up at the start of the race. There must be enough fuel left at the end of the race so that officials can take a 1L fuel sample at the end of the car. This is done to ensure that the laws surrounding fuel use are followed. However, you don’t want much more than that left at the end, as excess fuel adds unnecessary weight to the car, resulting in slightly slower lap times. In F1, where every split-second counts, this can be a disadvantage, so it is essential to get it right.

If officials cannot take the required amount of fuel out of the car at the end of the race, then the driver will be disqualified from that race. This means they’ll lose any points they won from that race and give up their position on the podium if they finish in the top 3.

This recently happened to Sebastian Vettel during the 2021 Hungarian Grand Prix. Vettel finished second in the race; however, he was later disqualified and had his trophy taken away because officials could only manage to get 0.3L of fuel from his car at the end of the race. Lewis Hamilton moved up to second and Carlos Sainz to third in the final official race classification.

How Do F1 Teams Know How Much Fuel To Put In The Car?

Now that we know about the intricacies of putting the exact right amount of fuel into an F1 car at the start of the race, you may be wondering how teams know how much fuel to use.

The answer is that they primarily base it on the result of complex calculations using data gathered during the free practice sessions and previous races. During the free practice sessions before a race, teams will run different scenarios. In one session, they might opt to do qualifying simulations, where they figure out how much fuel a car will burn during qualifying and what tires they should use. They’ll also often do long runs meant to simulate a race. They’ll then analyze how much fuel was used during the simulation and calculate the required amount needed for a race.

Teams (other than Haas) can also rely on calculations from their simulators in their factory. These simulators are highly advanced pieces of equipment that allow teams to play around with different scenarios as many times as they want to figure out what exactly will happen to their cars when the race rolls around.

Can F1 Cars Refuel During A Race?

No, Formula 1 cars cannot refuel during a race. This law came into place for the start of the 2010 F1 season. Mid-race refueling was banned for two reasons; the first was for safety, and the second was for financial reasons.

In the past, there were incidents in the pitlane where drivers or members of the pit crew were engulfed in flames following a fuel leak. The fuel used in F1 cars is highly flammable. This, combined with the heat coming from the cars and other machinery, is a potent combination. Teams also tried to put the fuel in very quickly to make sure the car was stationary for as short a time as possible. When you’re working fast, there is more chance of an error, which could be dangerous when dealing with a highly flammable liquid.

As a result, the FIA decided to stop cars from putting in more fuel when they came into a pit stop. This means that fuel is now only put into cars in a calm environment when parked in the garage. Teams are not in a rush, and the cars are not extremely hot because they haven’t been running for the whole race.

Mid-race refueling also costs more money, as it requires more complex equipment and more people to insert the fuel nozzle. When it was banned, many F1 teams were strapped for cash, so even though it wasn’t a significant money saver, it was a small help, and back then, every penny counted.

The issue with not putting more fuel in during a race is that it makes the cars much heavier. This puts lots of pressure on the tires, as they have to bear this weight, which can cause them to overheat more quickly. This can be problematic, as drivers may try to look after their tires more often, driving slower and overtaking less.

What Is F1 Fuel Made Out Of?

In the 2021 Formula 1 season, the cars ran on fuel with 5.75% ethanol. In the 2022 season, the percentage of ethanol has increased to 10%, which will see a renaming of the fuel to E10 (E standing for ethanol, and 10 representing its percentage in the fuel).

The new fuel is meant to be more environmentally friendly than its predecessor. This is because the ethanol must be a second-generation biofuel produced in an ecologically sustainable way. The idea is that this 10% of ethanol will almost be carbon neutral. However, having ethanol in fuel creates a performance disadvantage. It is not highly conducive to producing peak performance levels in internal combustion engines like the ones used by Formula 1 cars.

In the future, F1 plans to run on 100% biofuels as part of the sport’s goal to become carbon neutral by 2030. The idea is that cars will run on third-generation biofuels, known as “drop-in” fuels. The idea behind this type of fuel is that unlike second-generation biofuels containing ethanol, it can be simply dropped into an internal combustion engine without leading to a performance disadvantage.

If you’re interested, you can read more about F1’s goal to become carbon-neutral by 2030; check out this article on F1.com.

Once a fuel tank on Formula 1 car is full and ready to go for a race, it weighs around 242 lbs (110 kg). This has to be put in before the race starts, as teams can no longer refuel during races. Furthermore, race officials must be able to withdraw 1L of fuel at the end of the race for potential investigative purposes to ensure all the rules are being followed.

Louis Pretoriushttps://onestopracing.com
Previous article
Can F1 Drivers Talk To Each Other?
Next article
36 Facts About Daniel Ricciardo You Didn’t Know