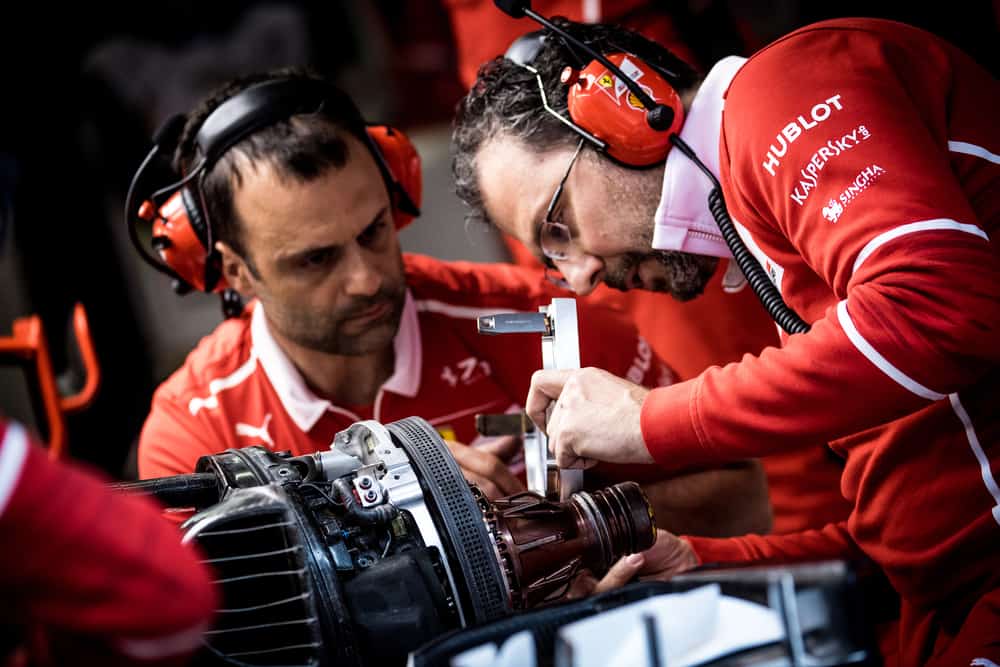 F1 engines are among the most sophisticated in motorsport, but how long do these engines last, and how often do F1 teams change out their racing engines during a season?

F1 teams are allowed three engines per driver per season. This allows each team to change engines three times per driver in a season. Some teams choose to replace their engines frequently within the limits, while others run each engine for as long as possible.

F1 teams are subjected to strict rules and regulations, including how often they are permitted to change engines. Let’s explore these regulations to discover how the teams are allowed to use their engines, as well as some physical engine factors that determine how long an F1 engine lasts.

Formula 1 is the fastest, most intense, most expensive, and most challenging sport in motorsport. The engines that are used in F1 cars are the most sophisticated in the world, and they must be built for fast lap times as well as reliability and built within certain regulation parameters.

The engines that are used in Formula 1 are a major factor in the speeds that these cars are able to achieve. However, racing engines do not last forever.

Formula 1 racing engines are built to FiA regulations regarding cost, power, weight, components, and reliability, but these engines are still put under so much stress during a race that they must be replaced regularly, but how long do these engines actually last?

How Many Races Do F1 Engines Last For?

This is due to the fact that all F1 teams are only allowed three total engines per race season. These three engines, and all of their major components must last the team for the entire season of 23 races, or the team will incur severe grid penalties.

If the team experiences severe engine damage or a blown engine during a season, they only have two engines remaining according to regulation, but teams have been known to use more engines than allowed and take the penalties rather than not finish the race season.

How Long Do F1 Engines Last In Distance?

This is only taking into account the total distances for each Grand Prix championship race. This does not include the distance traveled during qualifying and free practice before each race.

These pre-race events may very well cover hundreds of kilometers and out substantial mileage on the engines.

Based on these figures, we can definitively say that an F1 engine must last for a minimum of more than 2500km (1553 miles).

Some of the engines used by the teams in F1 may very well last for longer than these average distances, but these are the minimum requirements for F1 racing engines based on the distances involved in an F1 racing season.

How Many Engines Are F1 Teams Allowed To Use?

The engines that are used in F1 are the best in the industry, but they are not designed or able to last for very long. These engines do not typically last through an entire F1 racing season. With that in mind, how many engines are F1 teams allowed to use?

According to FiA regulations, Formula 1 racing teams are permitted to use no more than three engines per driver during the course of a season. These engines must last for the season including qualifying and free practice sessions. Any team using more than these will suffer grid penalties.

The FiA regulations regarding the number of engines used in an F1 season state:

“Unless a driver drives for more than one (1) Competitor, and subject to the additions described below, each driver may use no more than 3 engines (ICE), 3 motor generator units-heat (MGU-H), 3 turbochargers (TC), 2 energy stores (ES), 2 control electronics (CE), 3 motor generator units-kinetic (MGU-K) and eight (8) of each of the four (4) elements constituting a set of Engine exhaust systems during a Championship. For the purpose of this article, a set of Engine exhaust systems is deemed to comprise the following four (4) elements: primaries LHS, primaries RHS, secondary LHS, and secondary RHS.

With the consent of (and at the sole discretion of) the FIA, the numbers above will be increased by one for any driver using a power unit provided by a new power unit manufacturer (as defined in Appendix 9 of these Sporting Regulations) taking part in their first Championship.

Should the number of races in the 2021 Championship drop to 19 or less, the permitted number of motor generator units-kinetic (MGU-K) will be reduced to 2.”

These rules are only changed if a team uses a new engine manufacturer that has not competed in F1 before and only at the discretion of the FiA.

All of these regulations mean that F2 teams have a very limited number of engine changes available per driver during a season, but how many times do F1 teams change engines?

F1 teams change engines as necessary within the FiA regulations. If the engine that is being run suffers damage or malfunction, the team will replace the engine. Outside of that, a team will change engines three times in a season.

Changing the engine in the F1 car the allotted number of times in the season keeps the engine fresh and running in optimum condition, ensuring that the driver has access to the best possible engine for racing.

Formula 1 teams are allowed the use of three total engines and major engine components such as turbochargers, per driver, during the course of a race season.

This limits the number of engines available to the teams, which keeps the racing fair.

The engines must be replaced from time to time, as the engines are not built to last for as long as you may imagine.

Replacing the engine in an F1 car is optional, but some teams choose to change their engines as often as possible to ensure that the cars they use are in the best possible racing condition.

Louis Pretoriushttps://onestopracing.com
Previous articleMotoGP Vs. Moto2: What’s The Difference?
Next articleIndyCar Vs. NASCAR: Which One Is More Popular?