MotoGP Vs. Moto2: What’s The Difference? 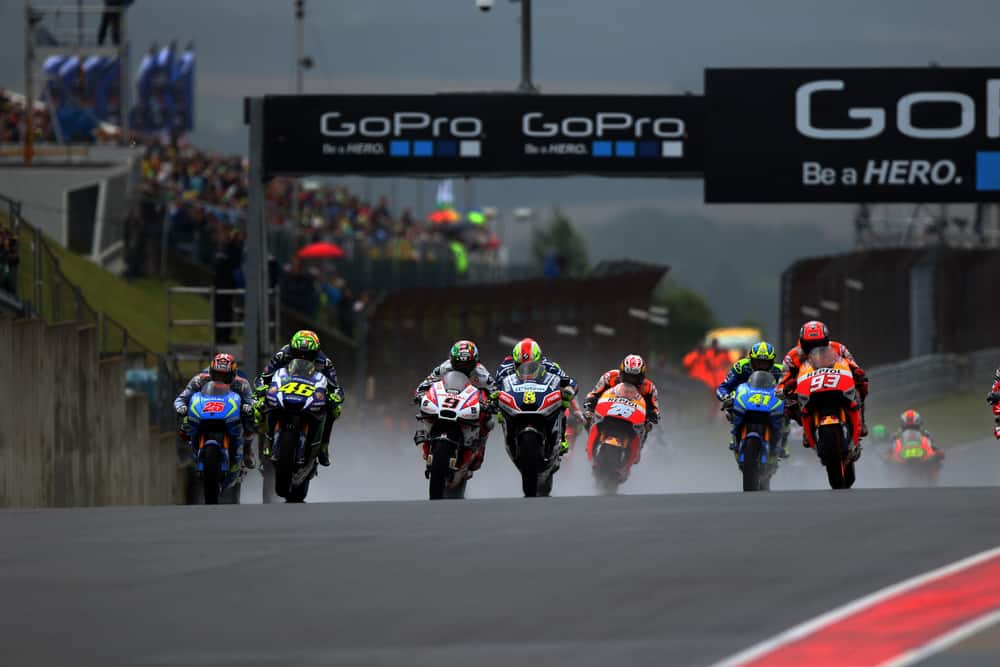 Moto GP and Moto2 may seem very similar, and it is true that Moto2 is regarded as a stepping-stone to MotoGP; there are several important differences between the two classes. This is MotoGP Vs. Moto2 – What’s the difference?

MotoGP is the highest class in motorcycle racing. Moto2 is the league below MotoGP. MotoGP bikes are faster, more powerful, and more advanced. All Moto2 bikes are the same except for the chassis. MotoGP bikes are more customized. MotoGP racing is more expensive than Moto2, and the riders earn more.

The differences between these two Moto classes are vital. Let’s take the time to compare these two racing classes and the bikes that are used in them to find out what the differences actually are and how they influence the races.

The Moto Grand Prix is the pinnacle of motorcycle racing. No other racing event, league, or class in moto can match the performance and power of the bikes, the complexity of the racing, the skill of the riders, or the advanced racing technology used in MotoGP.

MotoGP allows racing teams to utilize modern racing technology and mechanics to their full advantage. There are very few restrictions in MotoGP compared to the other Moto racing leagues, and the teams use the lack of restrictions to push the limits of what is possible in motorcycle racing.

The bikes used in MotoGP are the most powerful, biggest, and most advanced in any Moto class.

MotoGP bikes are not limited to any engine manufacturer, and they are allowed to use all modern materials and technology in their manufacture.

These motorcycles are typically equipped with 4-cylinder 1000cc+ engines, but the teams are not restricted to this engine type. Most teams choose these engines because they offer the maximum power output with minimum overall engine weight.

These engines produce around 250BHP (around 186KW), which is significantly higher than the engines used in other racing classes.

These bikes are larger than those in the lower classes, and the overall weight of the bikes is only heavier than Moto3 bikes. MotoGP bikes must weigh a minimum of 157kg (346 pounds), and all teams do their best to keep their bike’s weight as close to the minimum as possible.

These powerful motorcycles are capable of speeds upwards of 350km per hour (217MPH), which is almost a full 55KPH faster on average than the next fastest league.

The riders in MotoGP are the best in the world and are unmatched in skill and racing ability. The teams in MotoGP have the biggest budgets and the best technology and facilities available in the sport. There are more teams and riders in MotoGP than in any other Moto league.

Moto2 is the second biggest league in motorcycle racing. This racing class is often considered to be a stepping-stone to MotoGP, but Moto2 is so much more than just a means to an end.

Moto2 pushes riders and teams to be the best possible within far more strict regulations and restrictions than those of MotoGP.

The bikes and riders in Moto2 are on a much more even playing field than in MotoGP, and so the races often come down to rider skill and tuning setups rather than sheer power or technological advancement.

The motorcycles in Moto2 are all required to run the same engine and may not stray from it. The engines currently used in Moto2 are Triumph 3-cylinder 765cc engines. These engines have been implemented in the sport since 2019.

The Tires on the bikes in Moto2 must all be supplied by Dunlop, and the electrical and electronic systems in the bikes must meet FiM approval.

The motorcycle chassis is where the teams in Moto2 are allowed to deviate from one another, and the teams are permitted to develop their own chassis to gain a racing advantage.

The bikes in Moto2 have a minimum weight limit of 217kg (478 pounds), including the weight of the rider.

This minimum weight limit, the fact that the teams must use the same engines, tires, and electronic systems mean that Moto2 is won and lost by rider skill and the teams’ ability to set up their bike for racing.

These bikes are capable of speeds exceeding 295kph (183mph), produce around 140BHP (104KW), but they tend to be the heaviest due to the production-based engine that they are required to use.

Moto2 has a smaller budget than MotoGP, but the riders are still highly skilled, and the teams are incredibly proficient at what they do.

There are fewer teams and riders in Moto2 than MotoGP, and there are fewer big-name teams, but large teams such as KTM Red Bull fill out the grid.

What Are The Main Differences Between MotoGP and Moto2?

MotoGP and Moto2 and the two biggest and most prestigious racing leagues in motorcycle racing. These two classes boast the highest budgets, the best equipment, the most advanced technology, the most skilled riders, and the highest performing motorcycles.

There are so many similarities to these two racing classes that they may seem like the same thing, but in reality, these two leagues are vastly different.

Let’s go over some of the biggest and most important differences between MotoGP and Moto2:

Is MotoGP or Moto2 More Challenging?

MotoGP and Moto2 are the two top leagues in motorcycle racing and have the best riders in the world competing for the championship. However, these two racing classes can appear very similar on the track. Which of the two is more challenging for the riders?

MotoGP and Moto2 both have their own unique set of challenges. These races both pushbike and rider to the limit of their capabilities and remain right on the edge of what is physically possible.

Both of these race formats have their challenges, are both very difficult in their own right, but some would say that overall, Moto2 is more challenging than MotoGP due to the severe limitation on the bikes that make them difficult to control, and the fact that the racing comes down to rider talent more than any other factor.

Experienced riders have stated that using the stock engines used in Moto2 combined with the racing chassis of the bikes makes them very unstable and difficult to tame, even though the bikes used have significantly less power than those used in MotoGP.

The tires used on Moto2 bikes are also very tricky to handle, and unless the rider has a good understanding of how to use them well on each track, they do not stand much of a chance of leading the race.

The regulations in Moto2 mean that the bikes cannot be tailor-made to suit the rider. The only real variable in Moto2 bike construction is the chassis. Apart from that, all of the bikes are identical. They use the same engine, the same gearbox, the same oil, and the same fuel.

This means that every rider in Moto2 must use essentially the same bike, and that means that the outcome of the race is more dependent on the skills and talent of the rider rather than the mechanical advancement of the machine.

Riders that move from Moto2 to MotoGP have to learn to control the higher power of the bikes, the higher speeds that they race at, and the pressure of racing in the championship Grand Prix.

Many Moto2 riders that move to MotoGP struggle to make the switch and require a lot of time to practice with the more powerful machine and higher pressure of the event before they feel comfortable.

With that being said, the bikes can be tailor-made and tuned per rider to allow them the best chance of racing competitively and winning, and the bikes can be set up to be as comfortable as possible for each rider.

Once getting used to the bikes in MotoGP, the riders are able to compete more closely than in Moto2, and for this reason, many say that Moto2 may be more challenging for the riders than MotoGP. Despite the higher pressure of Moto GP and the more powerful bikes and higher speeds.

Are MotoGP and Moto2 Races Different?

MotoGP and Moto2 are very similar in many ways, but are there any differences between the races themselves and the racing formats?

Moto2 is based on MotoGP. This means that the racing in Moto2 follows the exact same format as MotoGP. Both leagues have 19 races per season, each with similar time limits, the same point systems, and the same practice and qualifying events.

How Do MotoGP, Moto2, and Moto3 Compare?

When comparing MotoGP and Mot2, it is also important to consider the comparison between these leagues and Moto3.

Moto3 is as important as the other two racing Classes in the Moto Grand Prix, but it is significantly different.

The regulations in Moto3 are more strict as there are more limitations placed on teams, riders, and motorcycles. Here is a shortlist of the important Moto3 regulations to highlight the differences between this league and Moto2 and MotoGP.

Motorcycle racing is intense, competitive, challenging, and extremely rewarding. The riders that compete in this sport are fearless, and the bikes that they ride are on the edge of what is possible for manufacturers to produce.

Both MotoGP and Moto2 are intense racing formats, but they do differ. MotoGP is faster, more expensive, and has fewer overall restrictions. Moto2 is slower, and the bikes are not as advanced, but the riding is more intense due to the nature of the bikes.

At the end of it, both racing classes are similar, but the MotoGP races are the biggest and most important races in motorcycle racing.

Louis Pretoriushttps://onestopracing.com
Previous article
What To Wear To An F1 Race
Next article
How Often Do F1 Teams Change Engines?