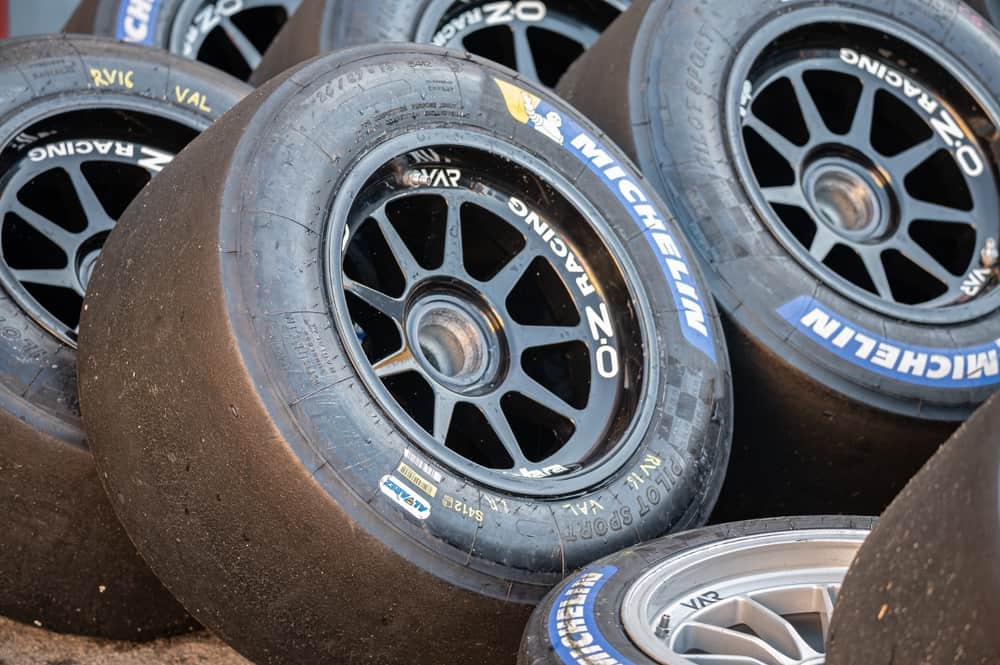 F1 tires are inflated with nitrogen. The F1 technical regulations allow for either nitrogen or air to be used but nitrogen allows greater consistency in the way that tires perform. Nitrogen gas is more chemically stable than air at the high temperatures generated in F1 tires.

Let’s take a closer look at exactly why Nitrogen is used in F1 tires these days as well as what teams do within the tire inflation rules to try and gain an advantage over their rivals.

What Are F1 Tires Filled With

I must admit that I had initially mistakenly thought that F1 tires were filled with compressed air like the tires on my road car. I had failed to take into account the much higher temperatures that F1 tires operate at. When you take into account that atmospheric air contains moisture and that humidity levels in the air are constantly fluctuating, it will be near impossible to have consistency in tire performance across all the sets of tires in a race weekend.

The solution to having predictable consistency was to inflate F1 tires with nitrogen. It eliminates all of the variables of using atmospheric air with differing moisture levels. Nitrogen gas is a more chemically stable compound than the combination of hydrogen and oxygen that you have in atmospheric air, especially at the high temperatures generated in F1 tires.

Why Are Formula One Tyres Filled With Nitrogen?

F1 tires are inflated with Nitrogen to ensure consistency in the way the tires perform, especially as tire temperatures increase.

Air humidity varies constantly and can easily result in the pressures of the four tires changing relative to each other. This can in turn affect the balance and handling of the car.

Using Nitrogen in tires also adds stable predictability when racing F1 at altitude. While most F1 races are at, or near sea level there are a few notable exceptions. The Interlagos circuit is at 2600ft (800m), while the Mexican GP is raced at 7500ft (2300m). Nitrogen-inflated tires still offer the same level of consistency at these higher altitudes.

Since When Has Nitrogen Been Used In F1 Tires

Nitrogen has been used in racing car tires since the 1960s. Before that Nitrogen had been used in aircraft tires to prevent the tires from expanding at high altitudes.

In those early days, teams would bring high-pressure Nitrogen bottles to each Grand Prix and use the bottled Nitrogen to inflate their tires. That changed in 1992 with the invention of the Uniflate system when Goodyear was the tire supplier to F1.

The first Grand Prix to use the Uniflate Nitrogen production system was the 1992 Japanese Grand Prix, and the same system is still used today even though F1 tires are now supplied by Pirelli.

What Pressure Are F1 Tires Inflated?

There is no standardized pressure that Formula 1 tires needed to be inflated to for the entire season. However, tire manufacturer Pirelli issues all the teams with the tires for the entire race weekend. Based on the altitude of the racetrack as well as the specific atmospheric conditions, Pirelli will issue a guideline for the safe pressure that the tires are to be run at for the duration of the race weekend.

When it comes to tire performance, if a tire is running at lower pressure it is able to create additional grip on the track surface thanks to the downforce. The flip side of this is that the additional grip comes at the cost of placing excessive stress on the side wall of the tire leading to the potential of sidewall blowouts at any time. Therefore, for safety reasons Pirelli as the tire manufacturer makes sure that they stipulate what pressure the tires need to be run for each different Grand Prix.

It is specifically stated in the F1 regulations that teams are not allowed to have any device fitted to the car which can change the tire pressure well the car is out on the track. In addition to this, all teams need to put sensors on the wheels that monitor the tire pressure and temperature. The data from these monitors are sent straight to the FIA so that they are able to make sure that the teams are not breaking this rule.

Teams are permitted to add additional nitrogen gas to their tires if they notice that the tire pressures are down below the stipulated safe value before putting them on the car. The FIA has inspectors in the pit garages that monitor the tire pressure of tires waiting to be used and will instruct the teams if any tires are under/over-inflated. These inspectors may not hinder a team’s access to tires if there is an unscheduled pit stop such as under safety car conditions.

There is one way that the teams are able to manipulate the tire pressure of their cars. Cold tires have less pressure than warm tires. So, if a team removes the heating blankets too early the tire temperature cools and thus reduces the pressure within the tire.

This is a trick that teams sometimes employ during qualification where the cars are kept in the garage for an additional 30 to 45 seconds before being released out onto the track by which time the tires have cooled slightly and reduced pressure. They can then get slightly more grip in order to hopefully produce a faster qualifying lap.

To counteract this the FIA has introduced a regulation whereby cars must be released from the garages into the pit lane within 60 seconds of the heating blankets being removed from the tires. If the car is not able to be released within those 60 seconds, the teams will have to replace the tires with a fresh set of heated tires. Teams will try and get the maximum advantage by making the release time from the garage as close to the 60-second limit as they possibly can during the course of qualification.

This 60-second limit for removing the heating blankets applies to pit stops too. Therefore, if a driver elects to stay out for an additional lap the tires ready to be fitted will need to be changed for a set of heated tires before the car comes in.

How Much Do F1 Tires Cost?

A typical set of Pirelli racing slicks such as those used by Formula 1 normally cost approximately $2,700 per set. Because Formula 1 teams need 13 sets of tires per vehicle each Grand Prix weekend the potential total cost is over $35,000.

In reality, though, the teams pay a fraction of that simply because each team has to pay a flat fee for the season for Pirelli to supply them with tires. Obviously, Pirelli gets a lot of marketing exposure from the use of the tires. Therefore tires are supplied to the teams at a discount.

How Long Do F1 Tires Last?

Formula 1 tires are designed and manufactured for high performance rather than durability. The red-rimmed soft compound tires manufactured by Pirelli have a lifespan of between 40 and 50 miles. This variation is most affected by how well the driver is able to care for his tires while driving the car.

The white-rimmed hard compound tire has a lifespan of approximately 100 miles. Again, the driver’s skill can extend the lifespan of the tires.

Do They Reuse F1 Tires?

F1 tires are designed to be used for a single stint of an F1 race and cannot be reused after that. When a tire begins wearing out it will begin to negatively affect the car’s performance.

One of the ways that F1 retains its relatively green status is that used F1 tires are shipped off to the south of England where there are ground up and used in the process of manufacturing cement. This arrangement allows F1 to reduce the amount of waste it produces each and every single race weekend.

Louis Pretoriushttps://onestopracing.com
Previous article
Why Is Ducati So Fast In MotoGP?
Next article
Do MotoGP Bikes Have A Battery?