Are F1 Cars Gas Or Electric? 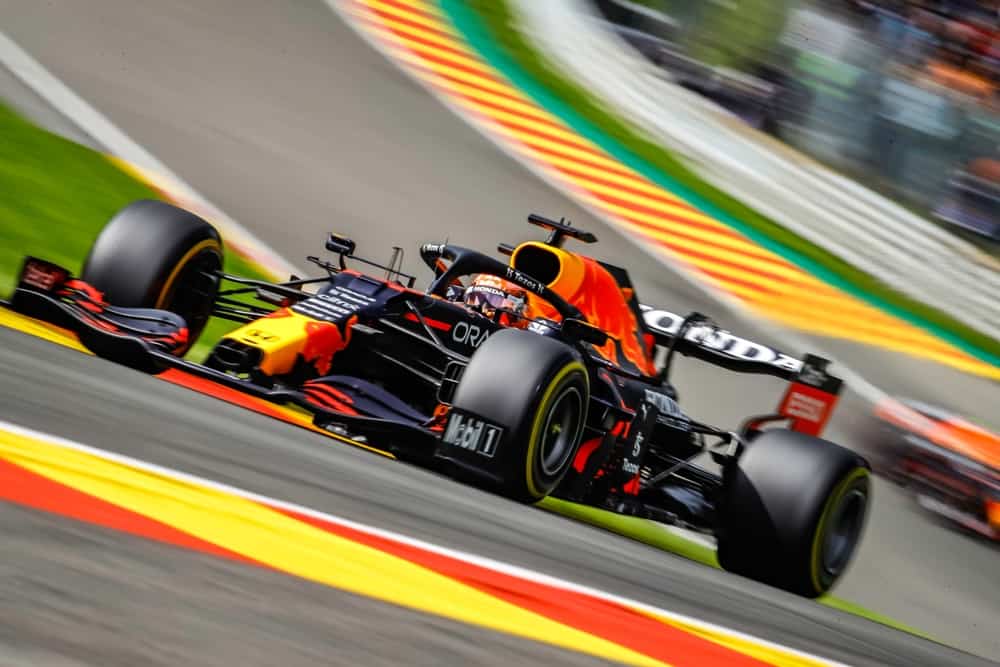 Formula 1 cars are at the cutting-edge of motorsport engineering and technology. There are no cars more well-engineered or designed than F1 cars, as they are the pinnacle of high-performance racing vehicles. However, one aspect of F1 cars that many fans wonder about is whether these cars are gas or electric powered?

F1 cars are gas-powered. The fuel used in F1 cars is 87 – 102 octane gasoline, similar to the fuel used in normal road cars. The fuel is designed with specific mixtures for best performance based on each individual car and race conditions, which means that no two F1 cars use the exact same fuel.

The fuel used in a Formula 1 car is not entirely dissimilar from the fuel that is used in ordinary road cars. This may be a surprise, but the idea behind it is that F1 cars run on fuel that is standard internationally. However, this is F1, so there is more to it than that. Let’s take a closer look at F1 fuel.

Formula 1 cars are at the pinnacle of motorsport engineering, and these cars do run on a particular type of fuel, but the power unit system that is used in F1 cars may sound misleading to many.

The power unit in F1 cars is stated to be a hybrid system, which may lead many to believe that F1 cars may be electrically powered. The truth is that Formula 1 cars are powered by a 1.6-liter V6 internal combustion engine that is powered by gasoline.

The fuel that is used in an F1 is a direct contributing factor to the power output and performance of the car. Formula 1 is so precise, and the tolerances for success are so small that each team formulates their own fuel according to FIA regulations and according to the engines that are used in the car.

The fuel is even altered according to track and weather conditions to maximize the power output of the car according to each race. This means that while F1 cars use regular fuel, the components of that fuel are mixed and altered specifically for each car for the best performance possible.

This means that while every F1 car uses the same type of fuel, the fuel mixture per car is different from each other.

Why Are F1 Cars Called Hybrids?

We have established that Formula 1 cars are powered by gasoline and that they are not electric vehicles, but this begs the question, why are F1 cars called hybrid vehicles?

If Formula 1 cars are powered by gasoline and not electricity and have no electric motor but are rather powered by an internal combustion engine, the term hybrid that is used to describe F1 power units can be confusing.

However, clearing up this confusion is simple. F1 cars are called hybrids because they make use of installed energy recovery systems that capture and store kinetic energy from braking and hat energy from the turbo exhaust system of the car, which is then harnessed as electrical energy to augment the power of the gasoline-powered engine.

The energy recovery systems used in F1 cars provide extra energy for the car that improves overall power output and performance and provides an extra boost for overtaking while racing.

What Fuel Is Used In F1 Cars?

Formula 1 uses 87 – 102 octane gasoline that is comprised of a mixture of oxygen, nitrogen, benzene, lead, manganese, non-alkali metals, and sulfur. The exact mixture of components may be altered by each F1 team within specific parameters to suit the best performance of the car.

There are various other regulations that must be adhered to as well, including the fact that the fuel used by every team must include 5.75% bio-components, and the DVPE and oxidation stability of the fuel must fall within specific parameters as well.

What’s Next For F1 Fuel?

Formula 1 cars do run on gasoline that is somewhat similar to the gasoline used in regular road cars, but the Formula 1 organization has major plans regarding the F1 fuel of the future.

From 2022 onwards, Formula 1 is taking steps to carbon neutrality and aims to be completely Net Zero Carbon by 2030. The first step in this environmentally friendly direction is the introduction of E10 fuel in Formula 1, which is 10% ethanol.

The 90% fossil fuels of Formula 1 E10 fuel will be produced from 100% sustainable sources and reduce carbon emissions by 65% compared to the standard fuel of 2021.

This fuel will be completely drop-in which means that the engines used in the cars will not require any modifications to receive the fuel.

This fuel is then intended to be used in a worldwide consumer market, which is a massive step in the progression of sustainable vehicle fuel sources. This is a big deal, and this regulation in Formula 1 may very well change the entire international automotive industry forever, never mind just affecting Formula 1.

Formula 1 cars are gas-powered vehicles. These cars do have augmented power supplied by energy recovery systems that collect heat and kinetic energy, which is stored and used as electric energy, which technically classifies F1 cars as hybrid vehicles, but the main power source of F1 cars is an internal combustion engine that is entirely powered by gasoline.

The fuel used in F1 is similar to standard fuel used in regular road cars, but it is formulated for high-performance in F1 cars. F1 fuel will move toward carbon neutrality from 2022, which is likely to change the dynamic of the entire motor industry forever.