Do MotoGP Bikes Have Keys? 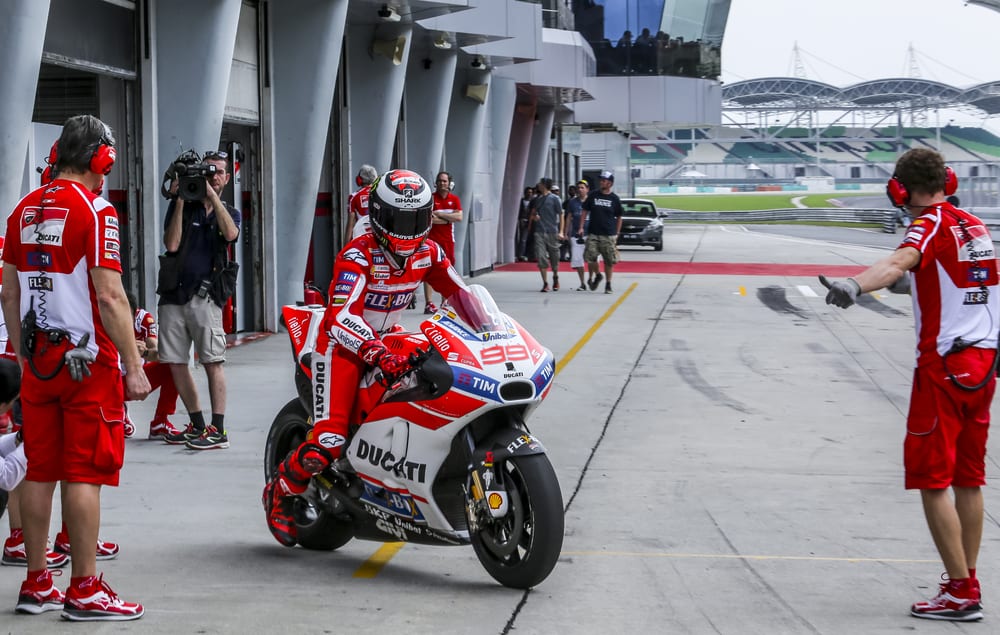 Do MotoGP bikes have keys? Have you ever watched a MotoGP bike race and wondered what the process is to start one of these incredible racing machines? These racing bikes might look like regular road bikes on steroids, but do not be fooled.

MotoGP bikes do not have keys. Removing the starter system increases the power-to-weight ratio, improving the acceleration, braking distance, and overall handling. Starting a MotoGP bike requires an external device like a roller starter or crank start, or the bike can be push-started.

You must have seen a racing driver frantically trying to restart his bike after a fall, pushing, running, and awkwardly jumping onto the bike. The motorcyclist does this because he cannot start his engine by any other means. Let’s look into how to start a MotoGP bike and investigate the thinking behind removing the traditional (key) starter system.

Does A MotoGP Bike Have A Key?

A MotoGP racing bike does not have a key (or an integrated starter system). Looking from a street-legal motorcycle perspective, this might seem strange at first. The rationale behind omitting the MotoGP bike’s starter system has to do with where the bike is used, namely on the racing track.

MotoGP racing is about speed, acceleration, braking distances, and reliability. Two main factors influence these parameters, namely weight, and power. Reducing the weight of the motorbike is the faster and more cost-effective solution to improving acceleration and braking.

The traditional starting system consists of a battery, an alternator, a starter solenoid, an ignition housing, and other bits and pieces. These pieces together make up a couple of pounds of dead weight. Why dead weight? Because the motorbike only has to be started once during a race, which is at the beginning of the race. Using an external starting device makes the key starting system redundant.

How To Start A MotoGP Bike Without A key

There are three methods to start a MotoGP bike’s engine. All three options rely on the same underlying principle. The pistons must be motivated to move in their cylinders for the engine to start. Let’s look at the three methods.

Starting A MotoGP Bike With A Roller Starter

The roller starter, also known as the paddock starter or pit starter, is an electrical device consisting of two or more rollers placed underneath the motorbike’s rear wheel. A battery-operated motor, activated by a foot switch, supplies power to the rollers. The rotating rollers (shaped to keep the wheel stable and in place) turn the rear wheel of the motorbike.

Crank Start Devices For The Use On MotoGP Bikes

The Ducati racing team uses a crank start device to start their bikes. This handheld device consists of a battery-driven motorized shaft that temporarily mates to the crankshaft of the motorbike. This device operates essentially the same as the roller starter. The rotational force is applied directly to the crankshaft and not through the rear wheel of the motorbike as with the roller start device.

This method of starting an engine is very familiar to many people. The motorbike (or vehicle) is manually pushed or towed in second gear with the clutch disengaged. With sufficient speed to overcome the inertia of the dead engine, the clutch is engaged, causing the engine to turn. As soon as the engine fires, the clutch is again disengaged.

Racing drivers, who need to restart their bikes on track after an incident, can often be seen performing a jump action while performing a push start. The driver does this to increase the traction of the rear wheel when the clutch is engaged.

Some engine designs do not favor the push-start technique due to the high engine compression ratios used in these engines. The rear wheel will lock up when the clutch is engaged, leaving nothing but a black mark behind on the tarmac.

The Advantage Gained By Weight Reduction In A MotoGP Bike

From this equation, we see that to accelerate the heavier bike at the same rate as the lighter bike, more force (or power) will be required to act on the bigger bike to propel it forward. The reverse is also true. A more significant force (think bigger brakes) is needed to stop a heavier bike over the same distance as a lighter bike.

Being able to slow down faster and accelerate quicker allows the racing driver to gain precious time during cornering. Negotiating corners faster than your competitor is a major advantage, especially when the top speed of the bikes is close to each other.

Let’s summarize the advantages brought about by reducing the MotoGP bike’s gross weight:

How To Switch Off A MotoGP Bike Engine

The MotoGP bike’s engine is switched off by pressing the kill switch. The kill switch (normally colored red) is usually found on the right handlebar, within easy reach of the racing driver’s thumb. Activating this switch accidentally while out on the racing circuit will see the bike coasting to a controlled stop unless the racing driver can restart the bike.

The kill switch also has a safety role to play. The kill switch system automatically detects the angle of the motorbike to the ground. Should the race driver be involved in a fall, this switch automatically disables the ignition, fuel lines, and other electronic circuits. Disabling the motorbike in this way reduces the risk of fire and injury to the driver and circuit marshals rushing in to assist.

MotoGP bikes do not have keys to save weight. All racing teams aim to be the fastest around the circuit. Eliminating non-essential parts are the quickest and cheapest method to shed unwanted weight and improve the speed and handling of the MotoGP bike. Eliminating the self-starter system from the motorbike will, in most cases, not negatively impact the racer’s chance of finishing the race.

Louis Pretoriushttps://onestopracing.com
Previous article
What Makes MotoGP Bikes So Fast?
Next article
Which Is Safer F1 Or MotoGP?