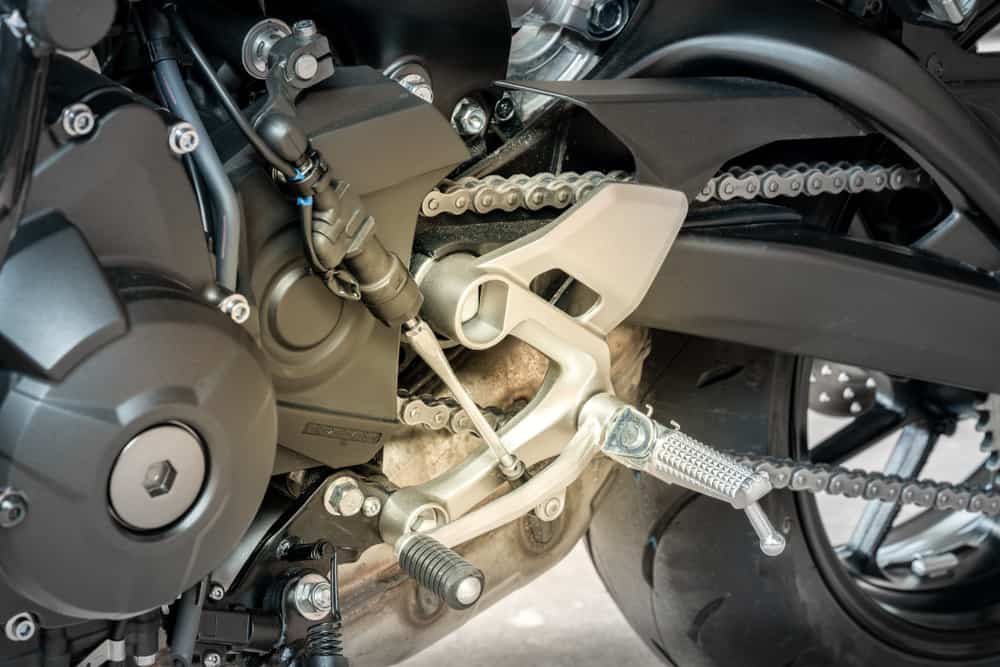 MotoGP is the pinnacle of two-wheel racing. The engines can supply over 250 Horsepower propelling the bikes to speeds close to 220 mph. But how do the riders change gears, and are the MotoGP bikes manual?

MotoGP bikes manually change gears by moving a foot pedal and have quick-shifters, so there is no need to use the clutch except for launching. A MotoGP bike uses a six-speed seamless shift transmission that can change gears in less than two-hundredths of a second.

Read on to discover what transmission is used in MotoGP, what are the FIM rules, and how riders change gears.

What Type Of Gearbox Do MotoGP Bikes Use?

MotoGP Bikes use a manual seamless-shift Transmission, allowing the riders to shift through the gears as required effortlessly. This transmission type is ideal for MotoGP as it can be tailored to the rider’s specific riding style and track requirements, but there are strict rules.

The following has been taken from the 2022 FIM MotoGP Technical Regulations:

a) In the MotoGP class, the total number of gearbox ratios (pairs of gears) permitted is 24, plus 4 overall ratios for each season for the primary drive.

MotoGP is an extremely competitive racing series with large amounts of money spent on equipment and designs to give a team the slightest edge. The truth is, there is very little information available about the teams’ engines and transmissions. Most of the information obtained is from nosy journalists seeking to answer public questions.

There is very little chance that all the transmission details will be made public, as rival teams will jump on the opportunity to learn other teams’ secrets. Thus, leaving the world to speculate about modifications. What we do know about MotoGP transmissions is that they work, and they work very effectively.

What Is A Seamless Transmission?

The word “seamless” is used because of the transmission’s ability to move from one gear to the next extremely smoothly and without power loss. The usual pause associated with manual transmissions is due to the clutch that needs to be disengaged with every gear shift; eliminating the need to use the clutch manually gives the bike a 7% acceleration.

How Does A MotoGP Seamless Transmission Work?

All the MotoGP bikes are equipped with a seamless transmission that enables the rider to change gears without losing any form of power or speed. If there is a problem with the transmission, it will translate to a loss of speed which can be the difference between coming in first or last. This is why transmission plays such a vital role in designing these high-performance prototypes.

A seamless transmission works differently compared to a standard manual transmission. It engages two gears simultaneously, though this is only done for a fraction of a second. The reason is to keep the power output to the rear wheel continuous, except for the 2 hundredths of a second it takes to switch gears.

The quick gear change and constant power to the rear wheel minimize the loss of speed, especially when selecting a higher gear.

Do MotoGP Bikes Have A Clutch

MotoGP bikes do use a clutch, but it is generally only used when pulling away. This will be on the starting grid or if the bike leaves the pits. During a race, while the bike is in motion, the riders do not use the clutch to change gears as they use a quick-shifter (clutch-less shifter). If something malfunctions on the quick-shifter, the rider can resort back to using the manual clutch to change gears.

The clutch on a MotoGP bike is called a slipper clutch. The slipper clutch is a torque-limiting device that will prevent the clutch from fully engaging until the bike speed, and engine speed matches up. Thus, it slips the clutch to prevent any sudden jerks or vibrations that may affect the transmission.

A slipper clutch will free up the rider during cornering as there is no need to feather the clutch, allowing them to concentrate on the correct posture. Slipper clutches are very complex and expensive, so they are mostly only found on racing bikes and are not standard on legal road machines. Aftermarket kits are available.

Where Is The Neutral Position On A MotoGP Transmission?

The neutral position is only used at the beginning and end of a race. A MotoGP bike transmission must be neutral before the engine can be started.

How Do Riders Change Gears On A MotoGP Bike?

MotoGP riders change gears by pushing a foot lever. The foot lever connects to a slipper clutch device that allows the rider to change gears with a minimal power loss between the engine and gearbox during each shift. This results in an even transition with less jerk and vibration.

The gears on a MotoGP gearbox are set in reverse order compared to a regular bike transmission. The rider pushes down on the foot lever to change gears up and pushes up to downshift. Each transmission has a maximum of six gears, with the highest gear set at the bottom with the lower gears above (gear one at the top). This transmission setup has become the standard in all MotoGP gearboxes.

When the rider slows down and selects a lower gear, the slipper clutch prevents the engine from over-revving by partially slipping until the engine speed matches the bike’s speed.

MotoGP transmissions are manual. They use a seamless transmission capable of changing the gears within two hundredths of a second. The bikes are also equipped with a slipper clutch that will only fully engage when the bike’s speed and engine speed are the same. MotoGP teams keep their transmission and engine details a closely guarded secret so that they may have a slight edge over their rivals.