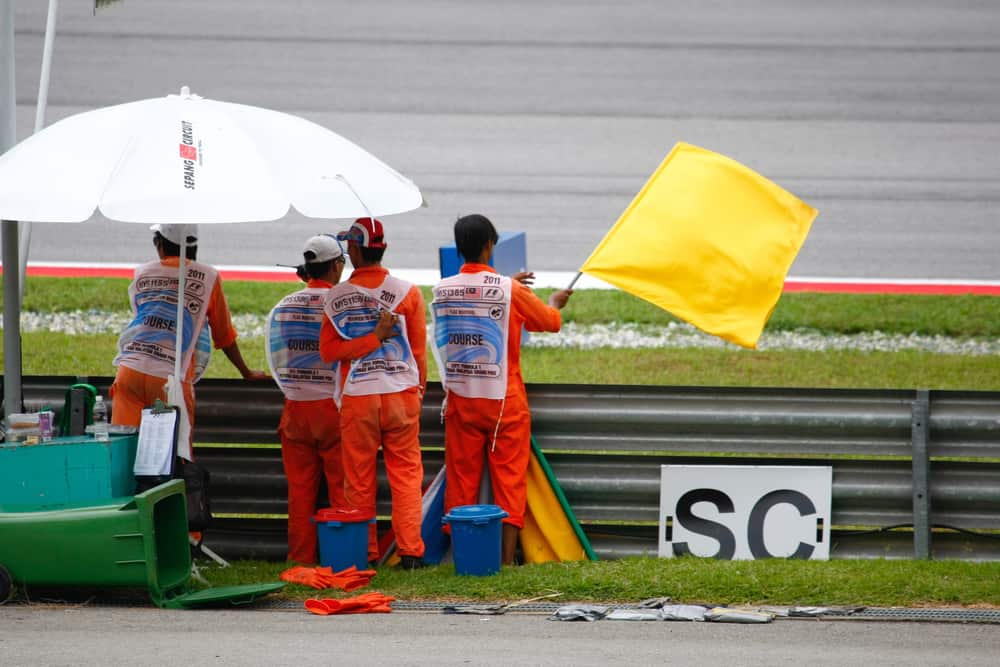 MotoGP and F1 are both over 70 years old. MotoGP started in 1949, while Formula one started in 1950. With age comes change, and both sports have undergone multiple changes to safety over the decades they have been around. However, which sport is safer, F1 or MotoGP?

Since 1950, F1 has introduced the Halo, roll bars, and fire extinguishers, among others making Formula one safer than MotoGP. The introduction of the Halo and biometric gloves trumps the primary safety device in MotoGP, the leather suits with airbags.

F1 and MotoGP have a few similar safety devices. F1 can rely more on the car to provide driver safety, whereas MotoGP can only mainly rely on the rider to protect themselves during an impact. Let’s have a deep dive into the key differences and similarities between F1 and MotoGP safety devices.

Formula 1 and MotoGP have a few safety devices in common, although they are used to different degrees. Standard devices include Helmets, gloves, race suits, and sensors across the cars and motorbikes to measure data and allow the safety crew to monitor the drivers and the riders in real-time. There are differences in both, such as the halo and crash harness, which are limited to F1.

The riders in MotoGP wear helmets that need to meet the standard of the governing body of MotoGP, race suits made out of kangaroo skin or cowhide, stitched together by hand, and include various padding across the suit tailored to the specific rider.

Finally, the airbag is a feature of motorbike racing suits not found in F1. This airbag is positioned around the rider’s back, shoulders, and ribs. There is also the mandatory chest pad that sits underneath the suit.

Included in the padding around the rider is lightweight and flexible armor to not get in the way, and knee and elbow sliders are used when the rider has to make an aggressive corner and their knees and elbows touch the ground.

The boots of these riders are made from two parts, the exoskeleton and the inner boot, that add ankle protection and foot protection. The gloves include padding for the wrist and palms and are attached to the rest of the suit to ensure they do not fly off.

In Formula 1, the drivers can experience forces up to 5G in high-speed corners and up to ten times that in a crash, and as such, their heads need to be protected and cushioned. To do this, F1 teams employ a HANS (head and neck support) system. This is attached to the drivers’ helmets through two anchor points and subsequently to the car’s body by seat belts.

The race suits and helmets used in F1 are both fire-resistant. Fire-resistant clothing does not stop there in F1. The boots, underwear, socks, undershirt, and balaclava are all fire-resistant. A fire extinguisher accompanies these within the cockpit.

The helmets in F1, similar to those of MotoGP, include cameras and sensors that gather and send important data such as acceleration, deceleration, location, head movements, and G force back to the teams and enable them to monitor the racers.

Unlike MotoGP, F1 can rely more on the equipment around the racer to protect them. MotoGP riders sit on the motorbike, so most safety equipment ends on the rider. F1 has the opportunity to exploit the car and material design to protect the driver.

The survival cell is employed by F1 and is essentially a large pod made out of carbon fiber that is almost indestructible and surrounds the driver. The survival cell undergoes rigorous testing, and all cars in F1 include this device and are made according to the standard of the governing body of F1.

In 2018, F1 introduced a mandatory and specifically designed safety component to all cars, the Halo. This Halo has already saved the lives of a few F1 drivers. It is made out of titanium and covered in carbon fiber, weighing seven kilograms and able to support 12 tons; it is undoubtedly one of the most valuable safety devices introduced to F1 within the last decade.

Fire hazards are a large part of the danger of F1, as is evident in the abundance of fire-resistant clothing, and as such, the fuel tanks of the cars are protected to ensure that if the driver crashes, the chance of a massive fire is reduced.

The fuel tanks are made of military-grade Kevlar, the same used to make bulletproof vests, lined with rubber and puncture-proof. This ensures that even under the extremely high operating temperatures of an F1 car, the fuel tanks are not under any more stress than they need to be and reduces the risk of a fire.

A few smaller but valuable safety devices employed by F1 include seat belts, padded cockpits, and headrests within all cars. These are in stark contrast to MotoGP’s safety devices, which essentially contain all their rider protection on the rider themselves.

Given the nature of the two sports, car racing and motorbike racing, it is evident that F1 has exploited the added space a car allows. Using structures like a survival cell and a halo to their benefit relies less on the driver carrying all the protection, while in MotoGP, the driver suits are the only thing protecting the racer. These allow F1 to be safe and innovative in developing safety devices and ensure they remain the pinnacle of motorsport and safety in racing.

Formula one and MotoGP have many differences, from how the athlete operates the equipment to how the racing works. These differences work their way down to the safety equipment used in sports. There are some similarities, such as the helmets, but there are numerous safety devices missing in MotoGP that are present in F1.

The absence of these devices is down to size constraints. MotoGP does not have the luxury of a 2-meter wide car to install various safety features. This difference allows F1 to employ multiple safety features that protect the drivers from serious injury far superior to that of MotoGP.

Louis Pretoriushttps://onestopracing.com
Previous article
Do MotoGP Bikes Have Keys?
Next article
Does MotoGP Have Pit Stops?