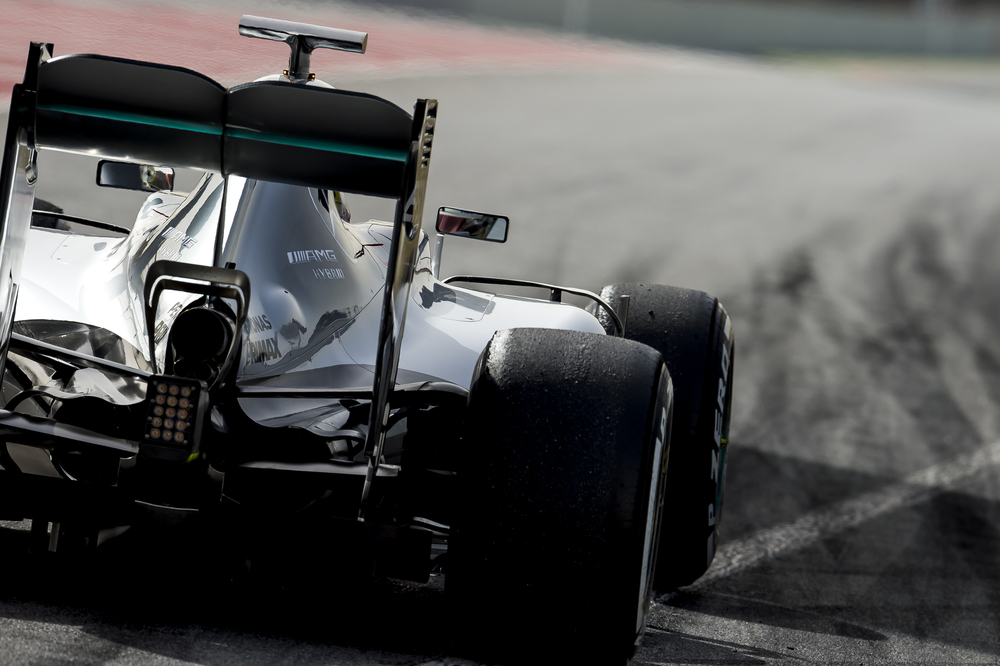 Throughout the history of Formula 1, numerous teams have achieved success, marking dominant stages and going down in the history books with their drivers, such as Ferrari with Michael Schumacher and McLaren with Ayrton Senna or Williams with Nigel Mansell.

However, the last decade has been dominated by two teams: Red Bull and Mercedes. The energy drinks team dominated the grid with Sebastian Vettel between 2010 and 2013. In the hybrid era, the Silver Arrows and Lewis Hamilton have taken over, breaking all existing records.

The two teams have met on numerous occasions on the track. Today they will face each other on paper. Here we go!

Mercedes vs. Red Bull: A Review Of Their History

The history of Mercedes and Red Bull could not be more different: a car manufacturer founded in the 1920s with an outstanding automotive history and an energy drink brand that decided to expand its business with extreme sports, including Formula 1. However, both have one thing in common: a winning gene.

Mercedes: The Return Of The Silver Arrows

The history of Mercedes in Formula 1 is unlike that of other major manufacturers such as Ferrari, which have had many successes since they have been competing for many years. The Silver Arrows have barely raced 15 seasons in Formula 1, but with tremendous success, becoming one of the best teams in history.

Mercedes raced in F1 as a constructor in 1954 and 1955, dominating the grid and winning the drivers’ titles with Juan Manuel Fangio. However, the German brand did not return to racing as a constructor until 2010. This is because Mercedes withdrew from motorsport at the end of 1955, after the fatal accident of its driver Pierre Levegh in the 24 Hours of Le Mans, in which more than 80 spectators were killed.

After 3 years with midfield cars fighting for some podiums and occasional victories, Mercedes hit the right key in 2014 with the introduction of turbocharged V6 engines, becoming the best team on the grid until 2021 and winning 8 constructors’ and 7 drivers’ titles, with Lewis Hamilton as its top star. He has equaled Michael Schumacher with 7 titles.

Mercedes has marked one of the longest and most dominant stints in history, with virtually no real rivals until 2021. Now the team’s golden days seem to be over, although it would not be surprising if they return to winning ways sooner or later.

Since its foundation, the energy drink brand has always been closely linked to extreme sports such as skateboarding, BMX, cliff diving, and air racing. In 1995, Red Bull made the jump to F1 as the main sponsor of the Sauber team, and in 2005, it made its debut as a constructor after purchasing the Jaguar team. A year later, Red Bull also bought the Minardi team, creating a second team, Toro Rosso, dedicated to training young talents.

Since then, Red Bull and Toro Rosso have given many young drivers the opportunity to debut in Formula 1 and the chance to succeed, such as Sebastian Vettel, Daniel Ricciardo, and Max Verstappen.

The team started scoring consistently and achieved some podiums in its first years, but it was in 2009 when it began to be really competitive, after the aerodynamic regulation changes that took place, thanks to the aerodynamics engineer genius Adrian Newey and started to achieve wins and podiums consistently.

The team’s golden era was between 2010 and 2013, when they won all the constructors’ and drivers’ titles, making Sebastian Vettel a four-time world champion, thanks to Newey’s great work with the design of the cars and the great harmony the young German had with them.

In 2014 came the turbocharged V6 engines, and with them, Mercedes took over from Red Bull, with no team being able to match them until 2021. The energy drinks team remained competitive all those years and broke the hegemony of the Silver Arrows in 2021 when Max Verstappen became world champion.

In 2022 Red Bull seems to have the best car again, so they are in a great position to dethrone Mercedes as the best constructor for the first time since 2014.

Mercedes and Red Bull are very particular cases in Formula 1, as they are teams that have been in the category for a relatively short time (15 and 18 seasons, respectively) but have achieved great success. Mercedes is the third most successful team in F1 history, while Red Bull is the sixth.

On the other hand, in 335 races, Red Bull has obtained 82 victories, 218 podiums, 76 pole positions, 80 fastest laps, 4 constructors’ championships, and 5 driver’s championships. The energy drinks team has obtained 24.48% of victories, 65% of podiums, 22.69% of pole positions, and 23.88% of fastest laps in the races in which they have participated.

These figures are impressive, even more so considering that 15 years ago, neither team had achieved a victory in the modern era. Red Bull’s era of dominance lasted 4 seasons, while that of Mercedes lasted 8.

Mercedes vs. Red Bull: The 2021 Championship

After 7 seasons with virtually no rivals for the Silver Arrows, 2021 was the first year in the hybrid era in which two teams could fight for the championship: Mercedes and Red Bull. What looked like a transitional season before the big regulatory changes of 2022 became one of the best seasons ever, with an intense fight to the end between Lewis Hamilton and Max Verstappen.

With the Red Bull RB16B, an improved version of the previous season’s car, coupled with a much more powerful Honda engine, the energy drinks team closed the gap to Mercedes considerably, while the Mercedes W12 was a mere upgrade of the previous car; it was still highly competitive, but not as dominant.

Max Verstappen did not let this opportunity pass him by. He fought intensely with Hamilton for the title, having numerous battles on the track and some controversial accidents, as in the British and Italian GP. Amazingly, the Dutchman and the Englishman reached the last race with the same points, 369.5. At the Abu Dhabi GP, Verstappen took pole position but was overtaken early on by Hamilton.

After Hamilton led the entire race, a controversial Safety Car allowed the entire grid to regroup. On the last lap, Verstappen overtook the Englishman to win his first world title, thus breaking Mercedes’ hegemony in the hybrid era. However, the German manufacturer still won the constructors’ championship. Red Bull finished second, 28 points behind the Silver Arrows.

Below are the statistics of both teams in the championship:

Mercedes vs. Red Bull: The 2022 Championship

Mercedes and Red Bull were the fastest in 2021. However, in 2022 things have changed, due to the new designs of the 2022 cars, with much simpler aerodynamics and the return of the “ground effect,” which was so famous and controversial in the 70s and 80s.

With 9 races held, Red Bull has proven to have the best car, with Max Verstappen having 6 wins and a third-place and leading the world championship, while Sergio Perez, with 4 podiums and 1 win, is second. On the contrary, Mercedes seems to be the third-best team, behind Red Bull and Ferrari, and they have only obtained 3 podiums with George Russell and 2 with Hamilton.

Mercedes started the season with many problems, due to the aggressive design of the W13, with almost non-existent sidepods and very small air intakes, although it has been improving with the passing of the races. However, they still have handling and balance problems due to excessive “porpoising” caused by the ground effect, which they have not yet been able to solve.

On the other hand, the Red Bull RB18 is a more balanced car, with a very powerful engine and aerodynamically very efficient. It is very fast, especially at race pace, although it has had some hydraulic and overheating problems, which have caused some retirements, so it is not as reliable as the Mercedes.

After 9 races, these are the statistics of both teams:

Mercedes vs. Red Bull: Their Most Successful Drivers

Some of the best drivers in history have driven for Mercedes or Red Bull, forging their legend thanks to these teams. In the first stage of Mercedes in F1, Juan Manuel Fangio won the 1954 and 1955 titles, and Stirling Moss participated in 6 races with them, obtaining 1 victory and 3 podiums.

In the modern era, the best driver for the Silver Arrows has undoubtedly been Lewis Hamilton, who has won 6 drivers’ titles alongside them, thus equaling Michael Schumacher. Nico Rosberg has been his only teammate so far who has been able to beat him, winning the title in 2016. Valtteri Bottas is the other winning Mercedes driver, with 10 wins and 58 podiums between 2017 and 2021.

On the other hand, with its young driver program, Red Bull has been dedicated to training young talents to make their Formula 1 debut with Toro Rosso and promoting them to Red Bull if they are good enough, where they have opportunities to win races. It has been a very successful program, and many drivers on the current grid trained with Red Bull.

Sebastian Vettel, who won four titles between 2010 and 2013, and Max Verstappen, the 2021 world champion, are Red Bull’s most successful drivers. Other great Red Bull drivers have been Daniel Ricciardo, Mark Webber, and David Coulthard.

Mercedes vs. Red Bull: Their Most Dominant Season

Vettel was proclaimed champion and finished an incredible 122 points ahead of second-placed Jenson Button, while Webber was third. In the constructors’ championship, Red Bull finished 153 points ahead of McLaren.

Both Red Bull’s 2011 and Mercedes’ 2016 seasons were two of the most dominant in history. It is true that Mercedes’ 2016 is better, as both its drivers were fighting for the title, while in 2011, Webber was not at Vettel’s level.

Along with Ferrari and its dominating era with Michael Schumacher, Red Bull and Mercedes are the two great teams of the 21st century so far. Red Bull dominated the end of the V8 engine era, while Mercedes has absolutely dominated the grid with the new V6 turbo-hybrid engines.

Both teams have gone down in the history books with their champions: Juan Manuel Fangio, Lewis Hamilton, and Nico Rosberg with Mercedes; Sebastian Vettel and Max Verstappen with Red Bull.