How Big Is An F1 Fuel Tank? 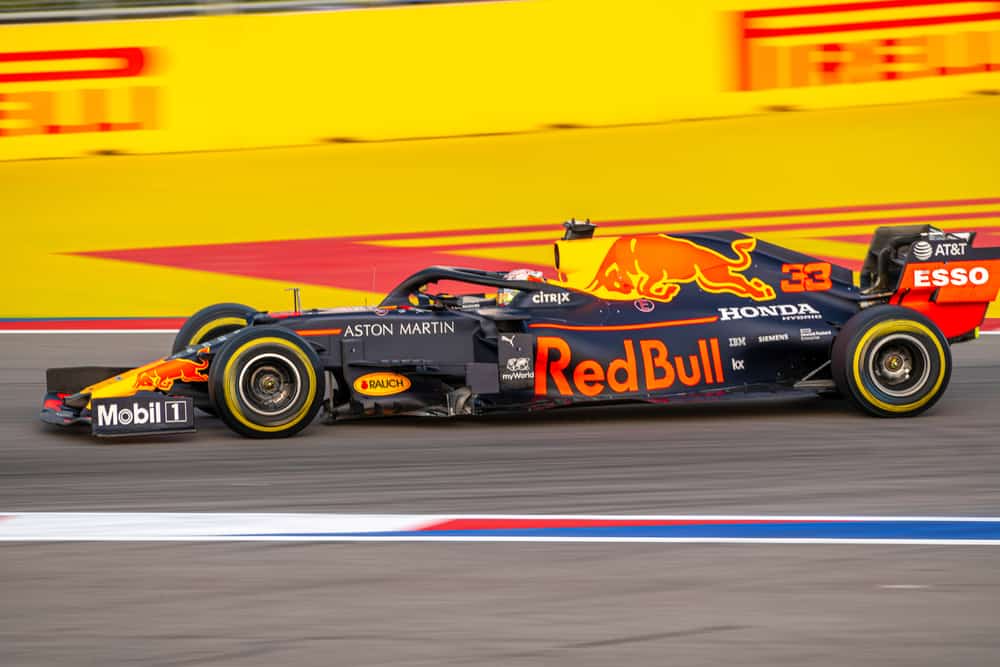 It has become a regulation by the Formula 1 governing body, FIA, that cars are no longer allowed to stop for fuel during an F1 race. Henceforth, cars must carry the amount of fuel necessary to complete the total race distance on one fuel tank. This might raise the question of, “how big is an F1 fuel tank?”

If you wonder about the advancements being made in Formula 1 fuels and the fuel tanks, read on!

How Do F1 Cars Not Refuel?

The Formula 1 governing body, FIA, banned the refueling of Formula 1 cars during an F1 race at the end of the 2009 racing season. The reason for this decision being made is due to the safety risks and costs that are involved in moving the refueling equipment that is needed for the cars to refuel.

It was estimated that it would cost on average 1 million Euros for the refueling equipment to be transported across the world, along with the staff needed to operate these refueling stations per race.

For bigger teams, that amount might not sound like a hefty price to pay; however, for the smaller Formula 1 teams, that cost is something that could be spent on other aspects.

Another primary reason for the ban on refueling Formula 1 car during a race is a safety concern. In previous races, there have been numerous instances whereby cars and their drivers have been caught alight due to leaking fuel nozzles or faulty fuel pump mechanisms.

The rule on refueling is that cars are allowed to fuel their cars during any practice sessions and the qualifying session. The teams cannot refuel cars from session three of qualifying and after qualifying.

Modern F1 engines are designed to be more fuel-efficient than their predecessors. They utilize a hybrid engine that combines an internal combustion engine and two electric motors.

A combination of two electric motors works in tandem to produce about 300hp of power to complement the power produced from the internal combustion engine.

The motor and engines work together to produce around 1,000hp. And this is where the actual efficiency of these engines shows; they produce around 625 horsepower per liter, more than any era of Formula 1.

How Far Can An F1 Car Go On A Full Tank?

A whole race distance is approximately 305 kilometers or about 190 miles in length, and Formula 1 cars can carry about 140 liters of fuel.

Regarding weight allocation for the recommended fuel allowance, the cars must carry 105 kilograms onboard. For a total race distance of 305 kilometers, we can estimate that the fuel consumption for an F1 car is around 46 liters per 100 kilometers or about 6 miles per gallon.

So, back to my original question on, “how far can an F1 car go on a full tank,” the answer would be about 305 kilometers, with estimated fuel consumption of 46 liters per 100 per kilometer. And since cars are not allowed to refuel, they need to complete an entire race on a full fuel tank.

What Fuel Does An F1 Car Use?

The fuel that F1 cars use currently is similar to ordinary premium fuel, with a far more tightly controlled mixture. Formula 1 fuel falls under high-octane road fuel with octane thresholds in the region of 95 to 102.

To ensure that teams and the fuel suppliers were not violating the FIA’s fuel regulations, all fuel suppliers, namely, Elf, Mobil, Petronas, and Shell, must submit a sample of the fuel they will be using for a race for inspection.

There have been incidents where racing teams used incorrect fuel mixtures in their cars. These teams were slapped with penalties for not abiding by the recommended fuel regulations set out by the Formula 1 governing body.

What Are F1 Fuel Tanks Made From?

The early designs of fuel tanks for Formula 1 cars were manufactured with aluminum cases positioned behind the cockpit. The fuel lines needed to fuel the engine ran past the driver to reach the engine.

Some earlier designs of fuel tanks differed from the original design; they were positioned at either side of the driver. Although this positioning of the fuel tanks improved the car’s handling, since it distributed the weight evenly for the car, it also posed a safety risk to the driver.

Any damage to the side of the car would ignite the fuel contained in these fuel tanks. With the introduction of rear-engine cars, the fuel tanks were moved to the front, positioning them right above the drivers’ legs. Flexible rubber tanks were initially introduced in Jaguars C-type sportscars in the early 1950s.

This unconventional design had the advantage that it was not as likely to get punctured or ruptured by any attachment straps or tubes. These rubber prototype bags were placed within aluminum tanks as a safety precaution.

Still, this design had a few flaws in the design. When an impact or crash occurs, the fragile components of the fuel line will break off at specific points, sealing the couplings and resulting in the bag being sealed off.

Before the rules on fuel tank placement and size became standardized, decisions to place small fuel cells strategically around the cockpit were attempted. This resulted in fuel cells being placed above the drivers’ legs while two tanks were placed at the rear, on both sides of the driver.

Today’s regulations stipulate that fuel tanks must be stored in the rear of the monocoque to ensure the driver’s safety and maintain consistency across all F1 competing cars.

The fuel tanks currently in use are composed of polyurethane and Kevlar to make them structurally sound and robust.

Fuel tanks of today have become a marvel of engineering.

The rubber fuel tanks are oddly shaped for their placement at the back end of the monocoque and are ribbed to keep all 30 sections of the tank intact. This safety design means that the fuel tanks can hold a capacity of 30 gallons or 110 liters of fuel to last for the total race distance of a Grand Prix.

There are two openings at the back of the fuel bag, one at the top for the fuel lines and one at the bottom for the pump. The pit crews use the holes on either side of the bag’s shoulder to fill up the tank.

The fuel tank currently in use is commonly referred to as a “fuel sack” or a “fuel bladder.”

The FIA regulations insist that the fuel bladder is mounted close to the car’s centerline and positioned behind the cockpit. For obvious performance reasons, it should be situated as low to the ground as possible.

Having been designed by ATL, the fuel sack features a deformable Kevlar-rubber design meant to hold its structural integrity on impacts and should also be resistant to punctures.

The design of the modern-day fuel tank on F1 cars is created to maximize safety, improve the usage of space, and maintain a level of adaptability and flexibility for races.

Louis Pretoriushttps://onestopracing.com
Previous article
Can F1 Tires Be Reused?
Next article
Why Do F1 Drivers Slow Down In Qualifying?