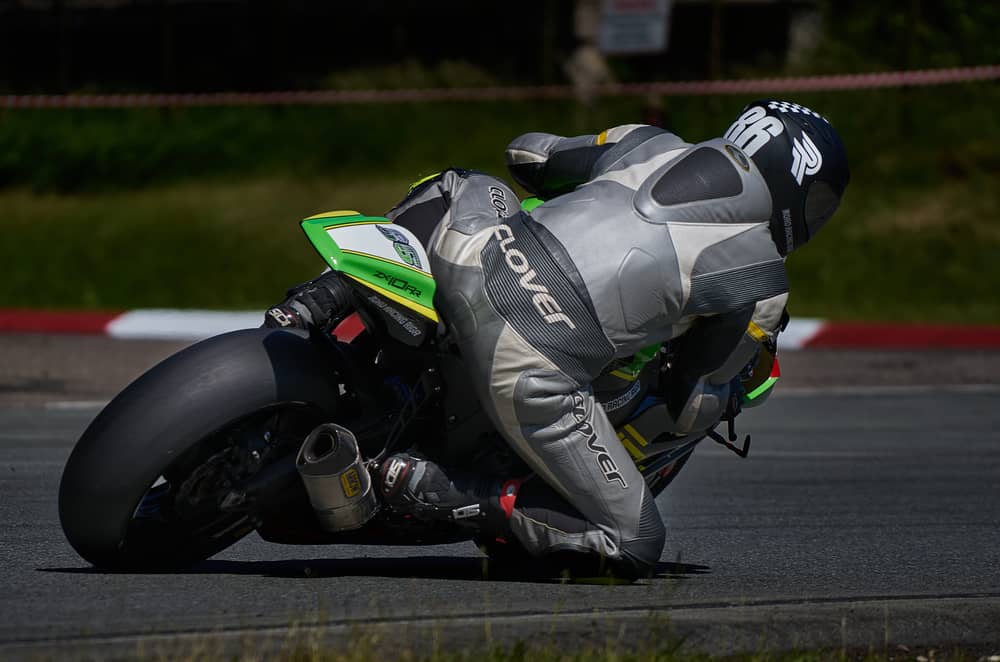 You are watching a MotoGP race. It is exhilarating. The noise and thrill of 24 customized motorcycles chasing each other around the track at speeds of over 200 miles per hour. Those iconic low-leaning turns and 24 super-fit riders participating. As you watch, something catches your eye on the back of your favorite rider, and you wonder what that thing is that MotoGP riders have on their backs.

MotoGP riders have a few things on their backs, but only one of these will be visible to spectators – the racing suit or leathers. The hump on the back of the rider is not a backpack but part of the suit, and its primary purpose is to improve aerodynamics.

1988 saw the first hump on the back of the rider’s racing suit. The material used was high-density foam rubber. The original purpose of the hump was not to improve aerodynamics but to act as a back protector. Over the last thirty years, the hump has been further developed and is now an essential part of the racing suit, with various uses.

What All Do MotoGP Riders Have On Their Backs?

The airbag is the last item a MotoGP rider would have on his back. The airbag is often incorporated in the same under-shirt as the back protector and would cover the rider’s shoulders, back, and ribcage. Airbags use sensors that would identify when a rider is going to crash, enabling it to deploy before the rider hits the ground, thus protecting him from serious injury.

What Is The Purpose Of The Hump On A MotoGP Rider’s Back?

When introduced in 1988, the purpose of the hump was to act as an extension of the back protector, to protect areas that the back protector could not. It consisted of high-density foam, so the hump could absorb impact and reduce the risk of back injuries during a crash. With further technological advancements in back protectors, protection is no longer the modern hump’s focus.

The primary purpose of the modern hump is to improve the rider’s aerodynamics, ensuring smoother airflow from the bike tank, over the helmet, and down the rider’s back. Better aerodynamics means less movement of the rider’s head at high speeds, which improves the rider’s concentration and saves much energy.

With the introduction of the airbag in MotoGP, the hump became the logical place to keep the airbag’s accelerometers, gyroscopes, and GPS to determine when an accident occurred. The modern hump also holds a bit of water, fed by a tube from the hump into the helmet, enabling the rider to drink water while riding, which is very useful in hot climates.

The latest development in the hump on MotoGP riders’ backs is the introduction of LED lighting. The sensors built into the hump will detect when a crash has occurred and will activate the LED lighting. The LED lighting will make the rider more visible to other riders, thus reducing the risk of a fallen rider getting hit by one of his competitors.

What Are The Benefits Of A Hump On A MotoGP Rider’s Back?

The humps on MotoGP riders’ backs have several uses. They house the electronics and sensors that activate the rider’s airbag, carry a bit of water that helps to keep the rider hydrated, and it has LED lights that light up in the event of a crash to make the rider more visible. However, one of the most significant advantages of the hump is its improved aerodynamics.

The initial purpose of the hump was to help protect the rider’s back. However, with technological developments, it is no longer necessary for the hump to act as a safety mechanism. Over the years,  scientific studies on aerodynamics in wind tunnels changed the shape of the hump and improved the aerodynamics of the bike and rider. Improved aerodynamics offer several benefits.

The hump on a MotoGP rider’s back is essential to the rider’s racing suit. The hump’s original purpose was to improve back protection, but it has since evolved. The modern hump’s primary purpose is to improve the aerodynamics of the bike and rider. The hump includes sensors for the airbag, water for the rider, and LED lighting to make the rider more visible in case of a crash.

Louis Pretoriushttps://onestopracing.com
Previous article
How Do MotoGP Riders Turn?
Next article
Who Is The Owner Of Red Bull F1?