Are All MotoGP Bikes The Same? 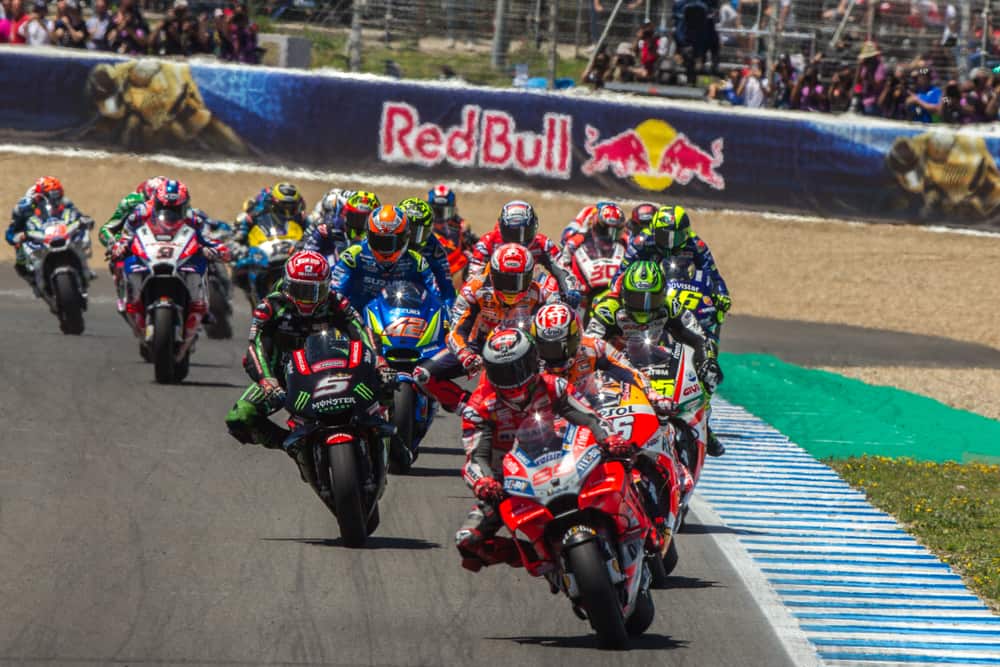 If you have ever watched Formula One, IndyCar, NASCAR, or MotoGP, the cars and bikes all look the same to the uninitiated. It is not true; under the skin, the machines are as different from each other as the regulations allow.

The regulations which control MotoGP impose very stringent boundaries that each team has to stay within. However, that doesn’t mean that all MotoGP bikes are the same, and in the current season, the engine configurations,  valve lifting devices, and suspensions are all distinctly different.

The regulations in most motorsports are designed to increase the safety of participants and spectators while also ensuring that the team’s performance levels are broadly similar and the racing remains competitive.

MotoGP Bikes Are Not All The Same

Six manufacturers are participating in the 2022 MotoGP season.

As with any major motorsport discipline, very restrictive regulations are applied to ensure a level of performance conformity and to maintain rigorous safety standards.

Despite the regulations, there are still several areas where each engineering team can boost performance and handling.

Between 202 and to at in the 2022 season, Ducati has dominated the championships and is reputed to have the most reliable, powerful engine of all the manufacturers.

The design decisions made on MotoGP end up being a balance between prioritizing how the bike handles through corners, how it accelerates, and the top speed it is capable of.

Three of the manufacturers in the 2022 season have chosen fundamentally different priorities compared to each other.

What The MotoGP Technical Regulations Require

The specifications that MotoGP teams must follow are listed in the table below. Some specifications are regulated, and others relate to a minimum or maximum performance to make the MotoGP competitive.

While teams are required to work within the regulated parameters, they can still produce engines, bike frames, transmissions, and suspension systems that offer performance advantages over other teams.

It is demonstrated in the following list, which shows the 2022 standings and the top speeds achieved in the season so far.

Of the twelve races completed in 2022 (at the time of writing), Ducati has been the fastest bike at five tracks.

This dominance has been achieved by producing a bike/engine/suspension combination that is superior to other teams.

Yamaha is currently in second place in the season standings; however, they are 91 points adrift of Ducati with a tally of only 180 compared to Ducati’s 271.

The third place team is Aprilia, who are only five points adrift of Yamaha.

The key differences between the different MotoGP bike manufacturers are.

The Yamaha YZR-M1 and the Suzuki GSX-RR  are the only manufacturers using an inline-four cylinder layout. The benefit of an inline-four layout is that it improves the bike’s overall handling, making them faster through the corners.

The problem with this is that most overtaking maneuvers are carried out on the straights and not in the corners.

Ducati has employed the Liquid-cooled, 90° V4, four-stroke, Desmodromic DOHC, four valves per cylinder engine, which is more powerful than any other team.

V-4 engines are lighter and narrower but longer than inline units; however, the facts speak for themselves.

MotoGP bikes powered by V-4 engines have won 44 of the last 50 races and been the fastest bike on track in 47 of those events.

A V-4 engine is able to have a shorter camshaft than one used in an inline-four layout,  and it also has two fewer bearings to run through (three compared to five) which implies that there is less friction in the system.

A 90-degree V-4 engine has a perfect balance.

The result is an engine that has a stronger camshaft, less friction, less vibration, and better balance than an inline-four.

While Honda engines are in a V-4 configuration, their engine uses pneumatic valves.

The valves in a Ducati engine use their mechanical desmodromic valves. While both systems prevent valve lift, the pneumatic technology requires an air compressor to maintain the air springs at the correct pressure.

The pneumatic valves employed by Honda cause parasitic power loss. Although the difference is not great, the margins are incredibly tight in a sport that measure victories in 1000s of a second.

Ducati introduced the ‘hole-shot device,’ a mechanical system that lowers the bike’s rear when waiting on the grid.

The natural inclination of a bike, starting with high power, is to lift the front wheel.

Lowering the suspension creates increased traction and counters the lifting force in the front wheel.

While many manufacturers have been forced to introduce similar systems on their bikes, in 2022, Ducati has developed the technology one step further with the following developments.

The suspensions and valve train configurations have all given Ducati a tip straight line speed advantage, and the result is that they have dominated the series for the last three years.

Louis Pretoriushttps://onestopracing.com
Previous article
What Oil Do F1 Cars Use?
Next article
How To Get Into MotoGP