What F1 Races Are At Night? 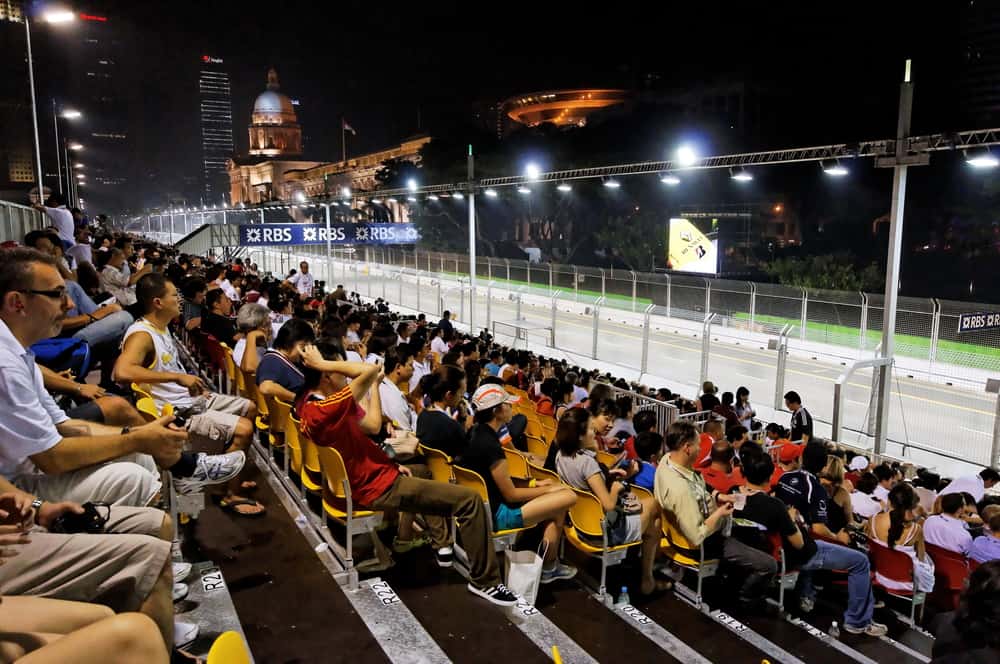 Formula 1 is among the most exciting motorsports internationally. This intense racing league is among the fastest, most expensive, and most prestigious leagues in motorsport. Every F1 race is extremely exciting, but there are few that are more intense than the night races in F1. This may lead F1 fans to ask, which F1 races are held at night?

In the 2021 F1 calendar, there are three F1 Grand Prix championship races held at night. The Losail International Circuit in Qatar, The Jeddah Corniche Circuit in Saudi Arabia, and the Yas Marina Circuit in UAE. These races are fast, exhilarating, and a favorite among F1 drivers and fans alike.

Formula 1 drivers compete on the most difficult racetracks in the world. Racing at night adds another element of complexity for F1 drivers, so the races that are held at night circuits are always something special. Let’s look at the night races held in the 2021 Formula 1 racing season and discuss what these races are like to attend for fans and how F1 drivers experience these circuits.

Which F1 Races Are Held At Night?

In The Formula 1 race calendar in 2021, there are three championship Grand Prix races that are scheduled to take place at night.

The races include the Qatar, Saudi Arabia, and Abu Dhabi Grand Prix races. In the past, there have been other Grand Prix races held at night, such as the Singapore Grand Prix, but as of 2021, these are the only three night circuits in Formula 1.

These races are always special for fans and drivers alike. Here is a short overview of each of the night circuits in F1 in 2021.

The Qatar F1 Grand Prix is held at the Losail International Circuit near the city of Losail in Qatar.

2021 is the first year that F1 is competing at Losail, and so there are no Formula 1 race statistics to report as of yet.

However, this circuit is known to be exceptionally fast, especially with the very long straight section incorporated into the track.

This track was originally built for the MotoGP race series, which resulted in a very quick and complicated circuit.

This circuit is equipped with high-performance permanent floodlights that illuminate the track for night races. These are some of the brightest track lights in the world, and the Losail circuit is one of the best-lit F1 night races on the calendar.

The Saudi Arabian Grand Prix is held at the Jeddah Corniche Circuit.

This circuit is also new to the F1 calendar, and the first F1 Grand Prix to take place here will happen in December 2021.

In simulations, F1 drivers are able to reach average speeds exceeding 250km/h (160 mph), which will make this one of the fastest tracks in F1.

Along with being one of the fastest, Jeddah is also one of the longest circuits in Formula 1. This track is the second-longest track in the 2021 Formula 1 calendar, second only to Spa-Francorchamps.

The Jeddah Corniche Circuit is 6.174 kilometers (3.836 miles) long and features 27 turns in total. This circuit is built specifically to be a night race circuit due to the extreme heat at the location of the racetrack. This track is exceedingly well lit, but it is not the most well-lit track in the F1 calendar.

The Abu Dhabi Grand Prix is on Yas Island at the Yas Marina Circuit in Saudi Arabia. This is the only night race circuit in the 2021 F1 calendar that has been host to F1 championship races in the past.

This track is the most well-lit racetrack in history, making it an ideal venue for night races in Formula 1. This circuit is 5.5 kilometers (3.5 miles) long, with a long straight of 1.14 kilometers (0.7 miles) long, and 21 turns in total.

This track is very quick and very technical. The debut F1 race held here was in 2019, and the fastest lap record was set by Lewis Hamilton and Mercedes Petronas of 1:39.283.

This circuit is not a favorite among many drivers due to its complexity and difficulty. Some drivers even go so far as to call this circuit dangerous. This, however, leads to very exciting racing for spectators of F1.

Night races in Formula 1 are not necessarily more challenging from a lighting perspective, as one might expect, as the circuits for these races are exceedingly well lit.

T would be unsafe to race F1, considering the speeds that the drivers and cars are capable of, if the tracks were not well lit.

The night races are challenging because these circuits are usually built for racing at night due to the high heat of the area in which they are built.

This means that these tracks are relatively new in the world of motorsport, and the designers of these tracks have gone all out to make them challenging.

These circuits have been intentionally designed to be unique in Formula 1 to make them stand out even further than just being known as night circuits.

Formula 1 is exciting for everyone. There is simply nothing like the sport of F1. This excitement is compounded when the races take place at the night circuits in the 2021 calendar.

These races are challenging, complex, fast, dangerous, and unique. They offer totally unique challenges for drivers and offer spectators an opportunity to see a level of racing never before seen in Formula 1.

The tracks are well light for the drivers and for the sake of the sectators.

A Formula 1 night race is not something to be missed. If you are an F1 fan and you are deciding which Grand Prix to attend, try to get into one of the night circuit races. These truly are something special.