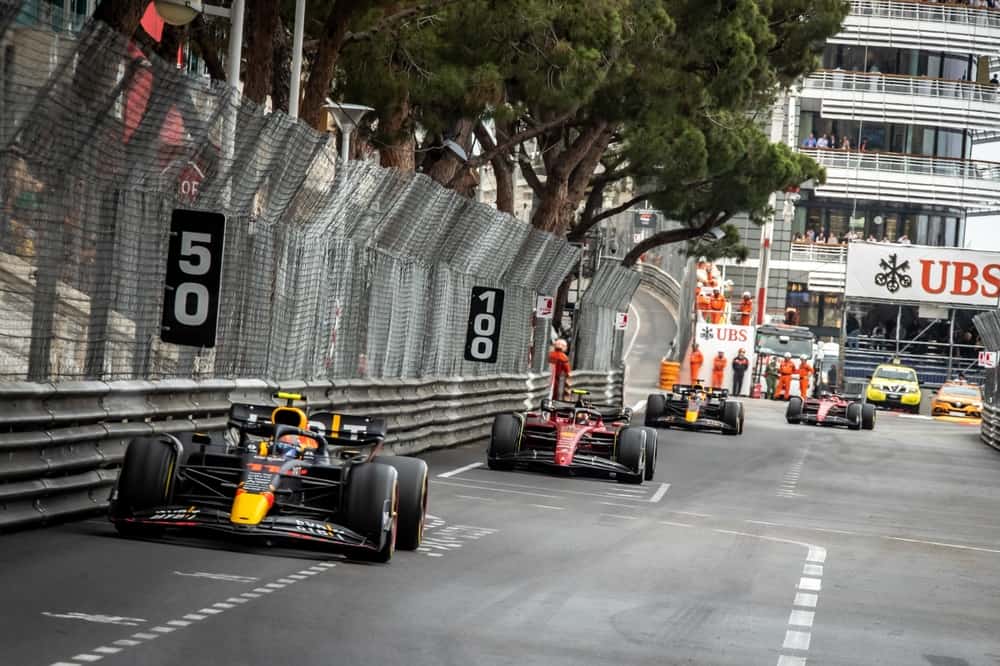 If you have watched motorsport in any shape or form, you would have heard the terms’ slipstream’ and even ‘dirty air’ being banded about. These terms refer to an aerodynamic effect caused by a lead car on the car behind them down the straight or through corners.

Slipstream is the term to describe the reduction in drag effect on the car directly behind the lead car caused by the generation of a lower pressure pocket due to the F1 car’s incredible downforce created by aerodynamic design. Drivers use this to increase their straight-line speed on the straight.

Slipstreaming is fairly straightforward to understand, so we will buckle in, get the revs up and take a spin around the track to get a better grip on how this phenomenon is created on straights and corners and how F1 drivers use it to their advantage.

How Is A Slipstream Created

F1 racing is all about aerodynamics. In building super-streamlined and aerodynamically hyper-efficient cars, some positive spinoffs exist for other drivers, and one of those is the slipstream.

As the racing car moves through the air at high speed, the airflow over the vehicle creates substantial downforce, which is necessary to keep the F1 car on the track. Aided by the car’s design and other components such as the rear wing, the F1 car can travel at super high speeds.

Moving through the air produces a pocket of low-pressure reduced turbulence behind the car. Being in this pocket substantially reduces the air drag on your vehicle and allows you almost to be ‘dragged’ by the lead car.

This gives the driver the chance to increase their acceleration and speed as they don’t have the air-drag slowing you down. You will have seen this in action when F1 drivers race down the straight, and the car directly behind the vehicle in front of it can suddenly pull out alongside and overtake.

Slipstreaming is not limited to F1 and occurs in every sport when something or someone is moving at speed. Go-karting, NASCAR, and MotoGP all have to slipstream as part of the sport, and even non-mechanical sports like running and swimming also have slipstreams.

The new 2022 F1 cars have been designed to make them safer and make competitive battles closer by creating a more simplified top-body  and a more neutral front wing design for greater aerodynamic sensitivity, which will elevate the intensity of the skirmishes on both the straights and through corners.

Slipstream is used when the cars are on the straight, and ‘dirty air’ refers to the converse phenomenon that occurs around the corners where the F1 cars are already in a more limited grip situation. Slipstreaming works on the straights as the downforce required is less than when cornering.

Dirty air is the opposite as it creates greater turbulence around the corners, often preventing drivers from overtaking as they lose the ‘aero balance’ and have to back off the throttle and take the hit on the corners.

The Aerodynamic Balance , Oversteer And Understeer

The aero balance in F1 refers to the overall aerodynamic balance in the F1 car, and as cars corner and travel straight, the Center Of Pressure changes as the airflow does. This means that the aero balance is the equilibrium between the downforce on the front wheels and back wheels.

How Does Slipstreaming Help Drivers

The reduction in downforce on the car means that the brakes and engine cool down and because there is less air resistance, the car uses less fuel. Typically, slipstreaming is a tactic used within teams to improve speeds and lap times, but it also works for opposition drivers.

Slipstreaming is particularly effective when the chasing car is within one second of the lead car. They can then take advantage of the slipstream, and as their Drag Reduction System Mode kicks in, they can execute overtaking maneuvers accurately and precisely.

The slipstream is often seen in qualifying rounds as teams will utilize this to decrease the lap time of the ‘slower’ car and improve the grid position, and depending on how the drivers finish, you may find the vehicles swapping slipstreams in the later session so that each driver has the opportunity to benefit from faster lap times and potentially better their starting position on the grid.

How Much Speed Can An F1 Car Gain In The Slipstream

If an F1 car can tuck right in behind another heading down the straight, the increase in speed in that pocket could be as much as 20 miles per hour, giving the rear car a realistic chance of overtaking if the straight is long enough.

Considering that every bit of speed makes a difference in F1 -and all other motor racing – a gain of 20mph on the car in front of you is significant. Remember that the same slipstream tactic that gets the trailing car ahead will work against them when they take the lead and have to fight off the chasing cars.

Surprisingly, the pocket of smooth air created by the leading car as it punches through the air in front of it can be felt and used by cars up to five seconds behind the leader. This will be experienced in the form of greater speed and closing the gap between the two cars, with the chasing car using slightly less fuel.

Ideally, being closer is better, but even so, once the driver finds the slipstream, they will make every effort to stay in it and ultimately use it to catch and pass the car in front of them.

If you want to experience this aerodynamic phenomenon for yourself, tuck in behind a car on the freeway – but not too close- and you will feel your car travel far more smoothly through the air than you would if you were not in the slipstream, then you’ll have an idea of how it feels.

The slipstream in F1 is a constant and consistent dynamic that can be used by drivers in any position to catch and overtake the car in front of them down the straight. The new design of F1 cars in 2022 will excite spectators and drivers alike as they work to use the slipstream to their advantage, so keep an eye out for it when you’re watching qualifying and the main race!

Louis Pretoriushttps://onestopracing.com
Previous article
What Happens To F1 Cars After A Crash?
Next article
Do MotoGP Bikes Have Gears?