Why Don’t MotoGP Bikes Have Mirrors? 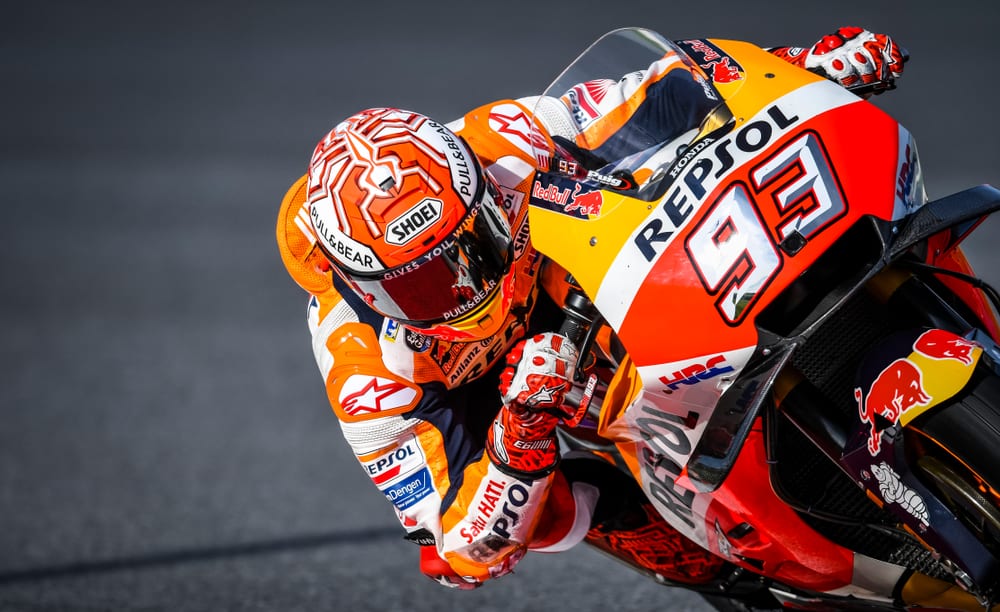 Anyone who has experienced riding a motorcycle on the road with other vehicles or people in the vicinity knows the value of mirrors when it comes to safety. Overtaking, turning, and even stopping becomes a coin-flip if you cannot see behind you to tell if it’s safe to do so. Traveling at over 300km / 190 mph, you may expect a MotoGP bike to have the biggest and best mirrors imaginable – so why don’t they?

MotoGP bikes don’t have mirrors because of safety, practicality, and drag. Mirror glass can easily break, posing a hazard. Since riders’ heads are constantly changing position, there is no practical place to mount mirrors. Aerodynamics is vital to racing, and mirrors create enormous drag.

The vibration caused by the 1000cc engines and the darting turns into which the riders throw their machines would make it impossible to see anything in a mirror with sufficient time to form a decision.

Race Cars Have Mirrors, So Why Not MotoGP Bikes?

In a race car, the driver is restricted to one position with minimal body movement, so it’s possible to place mirrors where they will be effective. On a MotoGP bike, the rider climbers over the machine constantly, extracting every nuance of performance from the bike.

Knees and elbows tucked in on the straights, with the head almost touching the tank, a rider shifts his entire torso from one side of the bike to the other for the turns, making mirror placement impossible.

There is no place you could place a mirror on a MotoGP bike where it would be effective for much more than a few scattered seconds, and if necessary, a rider can turn his head and take a glance behind.

Sound is instrumental, and you will hear approaching riders when they come up behind you to overtake unless they are riding a factory-prepared Ducati, of course, which will blitz past you on any long straight. (Mirrors would not help you in this situation, I assure you.)

How do MotoGP riders see behind them?

I asked one former Moto3 rider this question and got an expectedly facetious reply:
“We care only about what is ahead, not what is behind. When racing, we are focused on the finish line, not the starting grid.” It’s up to the rider approaching from the rear to ensure a safe pass, not the rider in front, to get out of the way.

Instead of mirrors, would it not be ideal if riders had a small screen onboard where pictures from cameras (which are already mounted on their bikes) showed who was approaching from the rear so that they could make informed decisions?

With the fantastic onboard cameras already in use, we may eventually have rear-facing cameras that show an image of any bikes approaching from the rear on the bike’s digital display. This image could be turned on via a button on the handlebars, like the Mapping Buttons we will discuss below.

It would take a glance at the screen by the rider, which is much faster and perhaps safer than looking backward at 300km/h.

Certainly, glancing at a screen while in a corner or bend or when overtaking is not feasible, but down a straight where you want to prevent anyone slipstreaming you, a camera and screen would undoubtedly work. (Again, not against the Ducatis!)

A different school of thought is that the fewer gadgets and electronics a rider needs to consult, the better. As one team manager put it, “Any distraction whatsoever can be extremely hazardous.”

A moment’s indecision in a group of 20-odd motorcycles traveling at the high speeds they attain every race could be and has been fatal. The last thing we should do is  increase the odds of a disaster taking place.”

Yet, the riders already have onboard optics that provides them with specific info:

Mapping allows the rider to adjust the throttle response and remove power from the engine, thereby conserving both their tires and fuel. An adjustment can also help manage the sliding action of the rear tire.

How Do Riders Execute Mapping Changes?

Bikes have several buttons on the left side of the handlebars, which control specific functions and adjustments during a race. Ducati has five, while Suzuki has four, and Honda has three buttons of different colors. Yamaha has three, if I remember correctly.

Using Ducati as an example:

As we can see with these buttons and the visual screen for onboard communication, the rider is already incredibly busy for the race duration. Any added distractions at all, like mirrors, could be disastrous. There is only so much data that any human can assimilate at any one time, and absolutely nothing gets added to a MotoGP bike unless it’s vital.

The Value of Pit-Boards instead of Mirrors in MotoGP

Pit-boards have always had a vital role to play in motorcycle racing. This importance increased with the introduction of flag-to-flag races, with boards now taking on the added task of notifying the riders when to pit.

According to LCR Honda’s Team Manager Lucio Cecchinello, any essential communications are done through the pit-board. The crews routinely give the rider his position number, the gaps to the rider in front and behind, and the name of the rider behind.

Boards also provide lap times and may notify you if a particular rival crashes out or breaks down, allowing you to plan the rest of the race. There is no need to go hell-for-leather if you are in fourth place, two seconds behind the rider in third place with just one lap to go, and your main rival falls out. The chance of an extra few points in the time allowed does not justify the risk.

Suzuki Team Manager Davide Brivio adds that there are other factors to consider: “If you approach the end of the racing season and you have a rider fighting for the title, his board is the brain that keeps him completely informed on what any title rival is doing.” The board replaces his mirrors and must keep him updated on any rider approaching him from the rear.

Although the rider gets certain information from the pit-board, the final decision is his, much as if he could see any approaching bikes in his mirrors. If a rider is approached from the rear, he will be aware of the threat as the pit-boards inform him of the gap between him and the rider behind.

Where the boards fail, however, is after the pit area is passed, where riders to the rear will often try to sneak forward and overtake before the motorcycles all make their way back past the pit-boards and get updated information.

Do Riders Use Other Means of Observing their Competition?

There are not many ways to check out the other riders in a race, but if you watch intently, you will see riders looking over their shoulders for a split second at times or glance up at television screens set up beside the track.

Since the coverage is live from cameras at every vantage point and by a helicopter that circles above the race, the pictures shown are in real-time.

In MotoGP, first come – first served is the protocol. The rider who reaches the corner or curve with his wheel in front of the other, has the right of way.

Mirrors are unnecessary as riders are usually only passed after becoming aware of the rider behind, either by pit-board notification, by hearing them, or by seeing them.