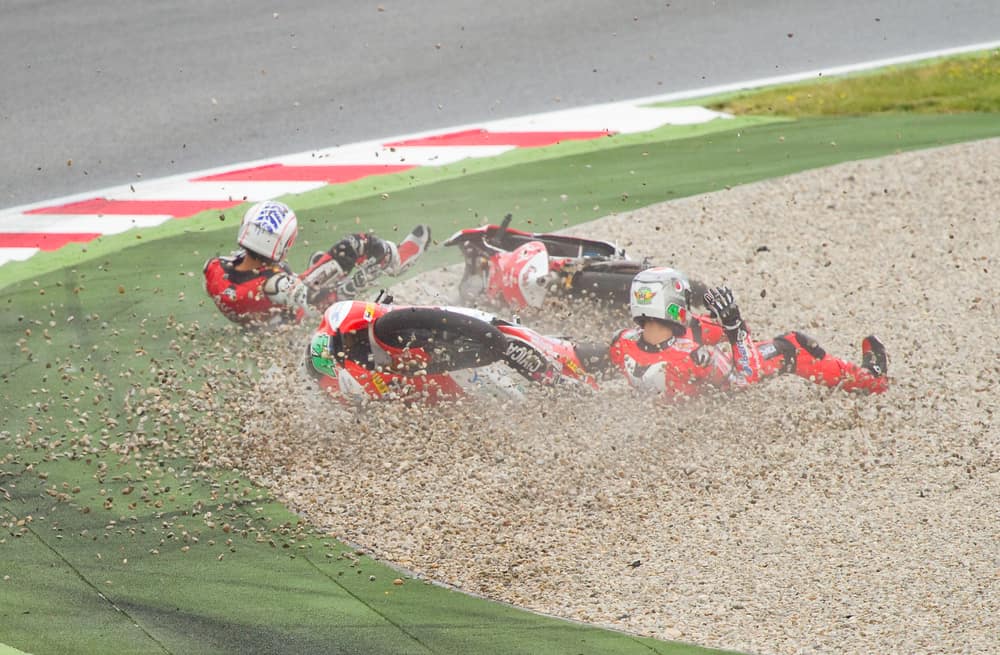 The technological advances of the past 110 years have certainly made riding the racing motorcycle easier. The 90 miles per hour barrier on a race track was first broken 110 years ago by Will Cook, racing a 2714 cc JAP engine on two wheels. The modern MotoGP bike has a 1000cc engine generating 280 HP, enabling a top speed of 220mph.

Advances in chassis, tire, and engine design have made the modern MotoGP bike easier to ride than the old JAP powered motorbike of yesteryear, but race these bikes to their optimum capability in search of a podium position, is very hard.

Since the start of the MotoGP in 2002, only six riders have won the championship in 19 years. Valentino Rossi and Marc Marques are tied with seven championship titles each, followed by Jorge Lorenzo with three titles, Casey Stoner with two titles, and Nicky Hayden and Joan Mir each with one title. Dominated by Rossi in the early years and Marques in recent years, it has always come down to their fearless ability to get the best out of their bikes. Let’s find out what techniques are used by the champions.

MotoGP riders are supreme athletes that are required to have fitness levels comparable to top track athletes. Their weight, strength, and stamina need to be optimally balanced to maintain control of the beastly power and speed they have to contend with for the entire duration of a race.

It is widely accepted that the physical demands on a MotoGP rider are higher than that of a Formula 1 race car driver. Here are ten techniques used by the top riders to go as fast as possible.

During hard braking, the bike will experience a downward force of 1G due to the earth’s gravitational force. By keeping their upper bodies upright when braking, the rides can achieve a downward force of 1.8G. The aerodynamic force of the air against the rider’s chest will create additional downforce keeping the rear wheel of the bike from lifting too far off the surface and pitching the rider forward. The rider has to carefully control the front wheel’s braking so as to brake as late as possible before cornering.

Allowing The Bike To Wobble

Riders call it the Death Wobble. Motorcycles always want to go in a straight line due to the gyroscopic force created by the wheels. This straight-line force is disturbed when the rider turns the front wheel. The steering dampeners and the torsional stiffness of the frame will try to correct the wobble caused by the direct steering. The rider has to resist the urge to fight the wobble and allow the bike to self-correct.

Secure The Knee Against The Tank By Twisting The Foot

The maximum grip for the racing-slick tires is at 6% slippage of the wheel. Allowing the tires to slip around a corner while accelerating out of the corner allows the rider to exit the corner at a faster speed. If the tires did not drift through the corners, the bike would travel in a U-shape instead of the much speedier V-shape.

Allowing The Bike To Remain Upright Whilst The Rider Stays Down

The rider allows the bike to stand upright when coming out of a corner while still leaning down the side of the bike. The tires have maximum contact with the road surface when the bike is upright, allowing for the best power transfer from the tires to the road. The rider tries to minimize the bike’s lean angle, letting the bike stand up while the rider stays down.

The rider only makes permanent contact at three points on the bike: hands on the handlebars, bum on or near the seat cushion, and feet on the foot-pegs. The rider is constantly changing his position on the bike by changing his feet position on the pegs and pushing his body into the bike in various directions. The core and leg strength required to dance around on the bike, constantly adjusting body position to optimize the control and speed of the bike, is enormous.

Using The G-Force From Braking To Move On The Bike

The rider has to move around on the bike to optimize the weight and power distribution of the bike to achieve optimum speed. The rider will use the G-force on his body to assist him in making some of these movements. Trying to resist the G-forces will make getting into optimal position much harder.

Standing Up To Reduce A Wheelie

Similar to deceleration, the bike and only accelerate at 1G due to the earth’s gravitational force. The rotational thrust of the rear wheel will try to force the front wheel to lift off the ground, resulting in a wheelie. Wings on the bike’s front fairing are designed to provide downforce to counteract the tendency for the front wheel to lift.

The rider will lift his butt off the seat and stand on the foot-pegs when accelerating out of a corner, putting his weight forward on the bike to help keep the nose down.

The leg dangle technique is named after Valentino Rossi, who made this maneuver famous for becoming a seven-time champion. Dangling the leg off the bike allows the rider to maximize the downward force of the bike and improves control when the rear wheel is sliding around the corner. MotoX riders also deploy this technique a lot on powering around a dirt track. In the off-season, Rossi does a lot of MotoX riding to maintain his skills and stamina.

How Often Do MotoGP Racers Fall?

The crash statistics since the 2010 season makes for some interesting reading. The 1000cc MotoGP has the lowest number of crashes compared to the 600cc MotoGP2 and the 250cc MotoGP3. Could this be due to the higher skill levels in the MotoGP versus the smaller formats?

Most falls will occur during the race compared to the free practice sessions, qualifying sessions, and warm-up sessions. The frequency of falls is mainly during the first lap of the race and the final three laps when tires are worn, and riders push hardest for podium positions.

Where Do MotoGP Riders Fall Most?

The Le Mans circuit of the French Grand Prix is notorious as the event with the most falls since 2010. The third turn of the Le Mans circuit is infamous for falling, claiming twice as many falls than any other corner in the MotoGP circuit. In 2020, turn three at Le Mans claimed 30 crashes versus 21 crashes at turn two of the Catalunya circuit.

The bravery and skill of MotoGP riders impact their success in achieving podium finishes. Marc Márquez and Valentino Rossi have been the two riders that have most dominated the modern era. Márquez falls almost three times as often as Rossi and yet has been more successful than Rossi in recent years.

Valentino Rossi, nicknamed The Doctor for his clinical riding style, has been successful in wet and dry conditions. He is a specialist at managing the racing conditions of his tires and being excellent in wet conditions. Márquez did not participate in the 2020 season due to a severe injury due to a fall. Márquez has won six MotoGP Championships since making his debut in 2013. He finished third in 2015 and did not compete in 2020 due to injury.

Márquez is considered one of the greatest innovators of modern MotoGP racing. Due to his comparatively exaggerated cornering technique of leaning so far over the bike, he seems to be in constant danger of sliding out. It would seem that the risk is worth the return for Márquez.

The MotoGP2 has more restrictions on the bike than MotoGP. All MotoGP2 bikes must have the same engine(Triumph three-cylinder 765), the same tires (Dunlop), the same software (Magnetti Marelli), same fuel (Petronas), same oil (Liqui Moli), and the same gearbox. Most of the bikes are built on the Kalex chassis.

The MotoGP bikes are only limited to 1000cc prototype engines. Each rider has seven engines for an entire race season. The riders must all use Michelin tires, which is limited for the season. The bikes may not carry more than 22 liters of fuel. Maximum speed may not exceed 340 km/h.

The step up from the strictly controlled MotoGP2 to the speed and power of the MotoGP can be a difficult transition, but one to which a good rider will soon get accustomed. Feedback from the riders regarding the difficulty of the two formats seems to point to the impact of the tires than any other aspect.

The Dunlop tires used in the MotoGP2 over the past three seasons are the same tires used in the Endurance World Championship. These tires have a rigid carcass construction and are thus quite stiff. These stiff tires give the riders poor feedback from the road surface and result in slower lap times. The riders need more confidence in attacking the corners at high speed.

If you can ride a motorbike, you will ride on a MotoGP bike without too many problems. You will not be able to race the MotoGP bike against others riders without considerable skills, fitness, and bravery.

MotoGP is harder on the body and the mind than any other format of Grand Prix racing, even Formula 1. The margin for error is tiny, and the slightest miscalculation by the rider can result in a catastrophic crash.

The number of accidents that the champions in this race format have had is a testament to the difficulty of racing a MotoGP bike to achieve podium finishes. A single crash in the first race of the 2020 season resulted in Márquez missing the entire season due to a badly broken arm.

It has taken him months to recover and start racing again in 2021. After two-thirds of the season is done, Márquez is placed 9th on the points table and is not in contention for top honors this year. Even being the best rider in MotoGP is hard.