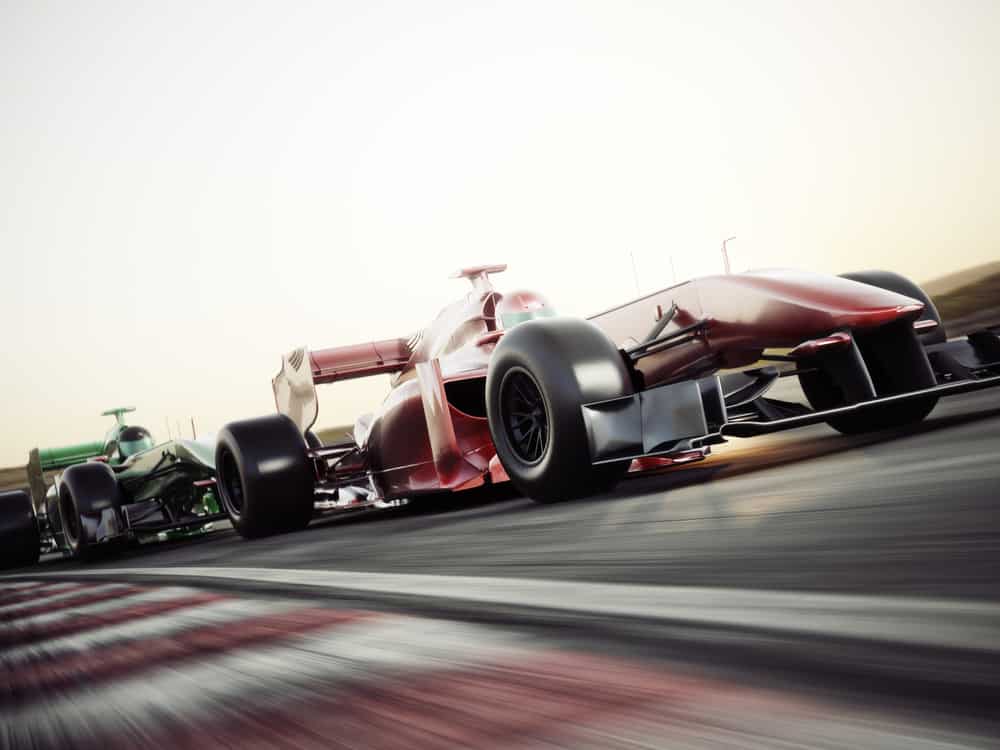 When watching a Formula 1 race, it is a ubiquitous sight to see the drivers weaving back and forth during the relatively slow formation lap and sometimes during the heat of the race as well. It can seem strange to watch these high-performance vehicles meandering over the track, which may lead many to wonder why Formula 1 cars zig zag?

Formula 1 cars zig zag for multiple reasons. The main reasons for the swerving include heating the tires and brakes during the formation before race start, cleaning the tires of any debris picked up on the track, and to reduce weight by burning extra fuel. Swerving during a race blocks other cars.

The main purpose of swerving back and forth before race start is for the driver to prepare their tires for the race, as well as other reasons such as keeping their tires free of debris. Zig zagging like this during the formation is more important than many realize and is not usually performed just for fun, as many may think. Let’s examine the reasons why F1 drivers swerve on the track and how efficiently the zig-zagging prepares the tires for the race.

Why Do F1 Drivers Swerve?

The usual place to see F1 drivers swerving is during the formation lap before the race begins.

This practice may seem unnecessary to some, and others may think that the drivers are just bored and swerving their cars to have some fun. Still, this motion during the slow formation lap is vital for the cars and can determine the outcome of the start of the race.

For the individual driver, the way a race starts may directly affect the way the race ends; therefore, a good start is crucial for every driver.

The zig-zagging that happens before the race is more important than many realize.

To Heat The Tires

The most crucial reason why F1 drivers swerve during the formation lap is to maintain heat in their tires.

The formation lap of an F1 race is very low compared to the speeds that these cars are designed to operate efficiently at, which means that the cars’ tires tend to cool down during this slow lap.

If the tires become too cool, it can lead to a poor start for the driver, compromising the outcome of the race.

The swerving transfers the weight of the F1 car from side to side, which puts stress on the tires, which translates to heat in the tires.

It is common to see the drivers braking hard during this lap, as this also heats the tires and the brakes, which also have to be at a certain temperature for optimum efficiency.

To Clean The Tires

Due to the compound of rubbers used for Formula 1 tires for maximum grip and durability at high speeds and stress, the tires are very “sticky.”

This means that the tires tend to pick up a lot of debris from the race track during the formation lap before the tires are at their optimum temperature.

The tires pick up debris such as small pieces of rubber left behind from previous races, pebbles, sand, and dirt from the track.

This can be a problem for the tires, as it reduces grip and may damage the tires at high speeds.

Swerving back and forth during the formation helps to remove any debris that the tires have collected during the slow lap.

This is one of the reasons why the drivers swerve more aggressively during the last section of the lap.

Formula 1 cars are high-performance vehicles that are built for maximum speed and grip, and the weight of the vehicle is a crucial factor in its performance.

Swerving during the formation lap of an F1 race allows the driver to burn off a calculated amount of fuel before the race, dictated to him by the engineering team, that will allow for the best race start possible.

Shedding some fuel reduces some of the weight of the car, allowing for more speed at the start of the race. This is a calculated expenditure, as the engineers know exactly how much fuel should be shed and how much extra speed it will provide versus how long the driver will be able to go without refueling.

To Block Other Cars

During the heat of a race, it is not uncommon to see drivers swerving their cars.

This usually occurs during tight racing, when two or more cars compete closely for a race position and try to overtake one another.

Swerving while racing may slow the car down, but it will allow a driver to keep their race position, giving them time to strategize a way to pull away from their rival.

This swerving often occurs during the first lap of the race, or if the lead car has been slowed down for some reason and the next position drivers are battling for their position.

Why Are Warm Tires Important?

Warm tires are critical for F1 cars. These cars are built to operate at incredible speeds while being as light as possible.

This means that downforce and grippy tires are some of the most critical factors for an F1 car to achieve its full racing potential.

The tires that are used for Formula 1 racing reach their highest level of grip between an exact temperature range. Keeping the tires of the car between this range is crucial for maintaining the grip of the tires, which translates to better race performance.

Heat in the tires softens the rubber, allowing it to better adhere to the track surface, allowing for faster corner speeds and shorter lap times.

Without being warm, the tires have very little grip at all, which will slow the car down and may be very dangerous due to the speeds that the vehicles race at.

How Well Does Zig Zagging Heat The Tires?

Zig zagging during the formation lap to heat the tires is a topic that is shrouded in controversy. Many say that it does not work well, and others are convinced that it is vital for the vehicle’s performance.

The truth is, there have been extensive studies around the efficiency of this practice, and F1 racing is one of the most calculated and scientific sports in the world.

If swerving during the formation lap was not useful, the drivers simply would not dot it.

This swerving does maintain the heat of the tires very well, as it transfers the weight of the car from bank to bank, which applies high levels of stress to the tires, which translates to heat. It is vital for a good race start for the driver.

F1 drivers swerve on the track for many reasons, but it is usually done during the formation lap and is usually to heat the tires of the car, remove debris from the tires, and to burn excess fuel, which reduces weight.

The bottom line is that zig-zagging on the track during the formation lap directly affects the start of the race for each individual driver.

The warmer and more debris-free the tires are, the more traction the tires have. The lighter the vehicle is, the more efficient it is.

These factors are vital for a good race start for every driver!

The next time you are watching an F1 race, and you see the drivers weaving back and forth during the slow lap. They are not bored, but instead they are readying their car for the intensive race to come!