How Do F1 Drivers Practice? 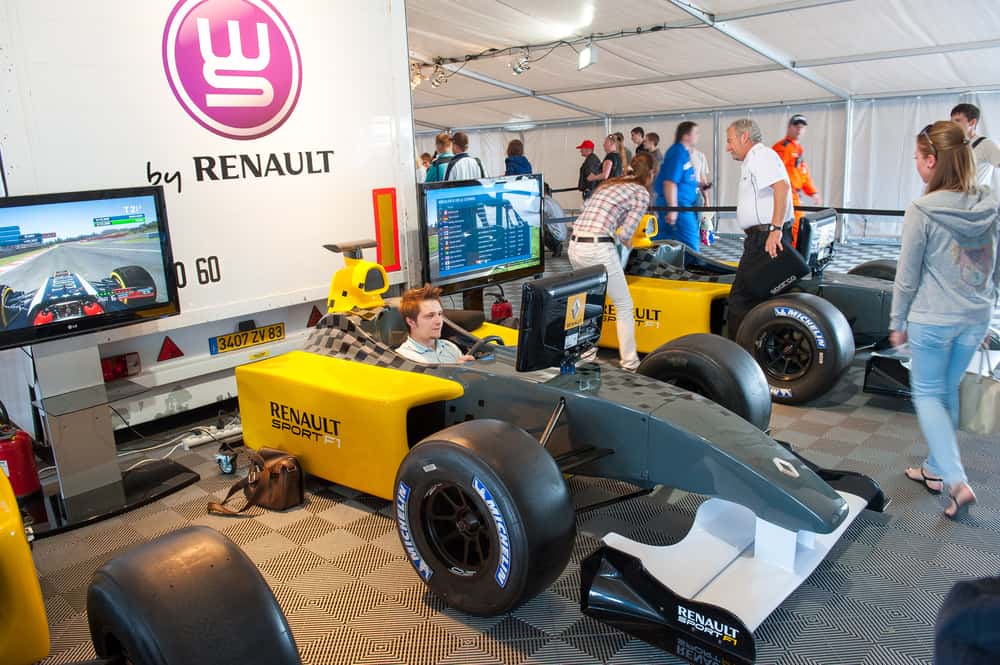 Formula 1 races are often only once every two weeks during the season, so drivers get a lot of time off. This, combined with all the months during the off-season, means that F1 drivers don’t spend that much time in their cars on track. But they are still expected to stay sharp and perform at high levels when the race weekend rolls around. So, how do F1 drivers practice?

Formula 1 drivers practice in three main ways. They spend time in the simulator at their team’s HQ and on their less advanced home simulators. They also sometimes participate in practice days with slightly older F1 cars to ensure they get time on the track.

Formula 1 is a sport where drivers constantly push the limits, so they need to always be as sharp as possible. However, as practice time on the track is limited, they need to make it up in other ways. Let’s explore what these are.

How Do F1 Drivers Train on Factory Simulators?

Formula 1 simulators are complicated pieces of machinery utilizing a range of technologies. They are operated by a team of people who program the simulator settings and gather the data from the simulator.

The simulators help drivers practice their driving and for teams to learn more about the track and test specific strategies. Simulators can be set up in any way the teams want them to be, including weather conditions, fuel load, tire compound, and more.

The simulator is meant to be as close to the real thing as possible. Drivers even wear their race suits and helmet while in the simulator. The simulator is essentially the front part of an F1 car, minus the front wing. It is a replica of the F1 cockpit, and it includes the halo and the same steering wheel used in the actual car to ensure drivers get the whole experience. The physical part of the simulator moves with the track to ensure the drivers understand how the corners feel.

However, the Haas F1 team does not have its own simulator due to budget constraints. This means that Nikita Mazepin only practice on his home simulator (discussed in the next section). This is not an issue for Mick Schumacher, as he has access to the Ferrari simulator as he belongs to the Ferrari Driver Academy.

Here is a video from the Mercedes F1 team showing how the simulator works in a bit more detail:

How do F1 Drivers Train on Home Simulators?

Many drivers have very basic driving simulators in their homes, which they sometimes practice on. These are not as advanced as the simulators in the F1 factories, and they are usually just a few screens positioned in front of a chair with a Formula 1 steering wheel. Essentially, it is just a very fancy gaming setup. However, despite this, they are still helpful for drivers.

The steering wheel is designed to match the stiffness on a Formula 1 car to ensure the drivers get a similar experience on the simulator. It also helps with their strength and reactions. The pedals are made to be as stiff as F1 pedals, so drivers can use them the same way they would use the real thing.

While they don’t simulate the driving experience by providing in-depth data about tire wear and other useful things, they help drivers better understand the track layout. They can help drivers understand important information about how best to approach a corner, where the corners are, and other valuable things.

Learning about a circuit can be helpful if drivers are going to be driving it for the first time or haven’t raced on it in a while. The second point has become an issue with the onset of the Covid-19 pandemic, as many races that were supposed to appear on the 2020 calendar were postponed due to travel restrictions.

What Are F1 Training Days?

In the past, Formula 1 drivers spent a lot more time on the track, as teams were constantly testing their cars to improve them. However, since 2009, Formula 1 banned all in-season testing from reducing F1 teams’ money.

This means that the only time F1 teams can officially test their cars on track is during the official pre-season tests conducted in February and/or March. This time allows teams to try out their new components and cars developed over the off-season.

There is also a young driver’s test at the end of the season, but this is more about giving young drivers a chance to drive an F1 car. Sometimes this will be a driver who will start in F1 in the following year or just a driver the team wants to give more experience in a Formula 1 car to. The car used will be the car used by the team that season.

However, this doesn’t mean that Formula 1 drivers get no track time during the F1 season. Teams often run practice days or filming days with cars from previous seasons. Sometimes, this will be during the off-season, before the car for that year is complete, or during the season itself. These practice sessions won’t be with the current season’s car but rather with a previous car. This is allowed, as it is a practice session, not a test session.

For example, during the 2021 F1 season, between the British and Hungarian Grand Prix’s Carlos Sainz and Charles Leclerc completed multiple laps in the 2018 Ferrari car, the SF71H. This practice day was hosted at the Fiorano Circuit, just outside of Maranello in Italy. Scuderia Ferrari owns this circuit, and they use it for testing and development purposes.

The point of these practice days is to give Formula 1 drivers some time behind the wheel of an F1 car to ensure that they continue to remain sharp during the season. These practice sessions allow drivers to hone their skills without the pressure of a race weekend and all the fans, journalists, and other teams watching. You cannot beat the real thing, and this is as close to driving an F1 car during a race weekend as drivers will get.

Practicing on simulators is the easiest and most common way F1 drivers practice their driving. Thanks to modern technology, simulators are very similar to an actual F1 car, so they are an excellent way for drivers to hone their skills.