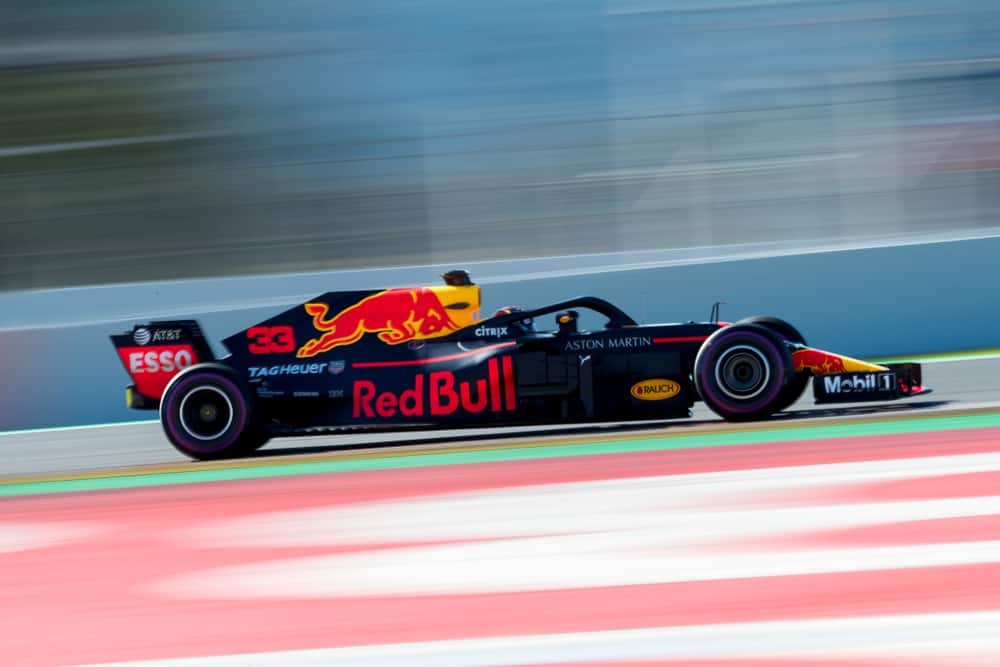 Formula 1 cars are among the most impressive racing vehicles in motorsports. These cars are a technical marvel and boast the finest engineering of any car in motorsport. One of the defining features of F1 cars is how low they are to the ground. We understand that being lower to the ground is beneficial for a race car, but how low are F1 cars?

Formula 1 cars are very low to the ground and have a low overall height. The general ride height of F1 cars is 30 – 35mm at the front and 75 – 80mm at the rear. The ground clearance in the center of the car is roughly 75mm. The height of the car may not be more than 1000mm above its centerline.

F1 cars are very low to the ground. This low ground clearance improves stability and aerodynamics and improves handling for better cornering speeds. Let’s take a closer look at the ride height of F1 cars, the ground clearance of these vehicles, as well as the overall height of the car to better understand the F1 car itself.

How Low Are Formula 1 Cars?

The height of a Formula 1 car is integral to the performance of the car on the track. If the car is too low to the ground, it may potentially cause damage to the car and worsen the aerodynamics, but if the car is too high from the ground, it will not handle as well and have significantly lower cornering speeds, which will in turn lower overall lap times and make the car significantly more dangerous to drive.

This means that every F1 car must be at the perfect height in every dimension for maximum performance, safety, control, speed, and handling. All of this means that the height of an F1 car is a complicated conversation and must be approached from several different angles.

Each of these components of F1 car height is critical to understand and vital for the overall performance and success of the car on the track.

Let’s discuss these aspects of the F1 in more detail to gain a better understanding of the importance of F1 car height.

The ride height of a Formula 1 car is not the same as the ground clearance of the car. The ride is the suspension set up of the car and how much give is allowed in the tires and suspension while driving in order to best control the aerodynamics of the car in motion to improve the performance of the car on the track.

This is the setting of the suspension and tires while the car is not moving, but it will differ when the car is in motion during a race, as the car will shift up and down according to the terrain of the track and the forces acting upon the car while racing.

The dynamic suspension of the car must be set up to take the best advantage of the active downforce and aerodynamics of the vehicle while racing.

The ground clearance of the Formula 1 car is the distance that the bottom of the vehicle is from the ground. This is measured according to the lowest component of the car, which is the protective skid block under the vehicle.

The setup of the suspension means that the F1 car is lower to the ground in the front than it is in the back, and each F1 car has a slightly different ground clearance according to component size and suspension, and tire setup.

The ground clearance of a typical F1 car is about 75 millimeters off the ground in the center of the car. This does not include the titanium skid block that is fixed to the underside of the vehicle to protect it from damage.

Each F1 car has slightly different dimensions, are there is some room for the difference within the regulations. This means that it is essentially impossible to say the exact ground clearance of every F1 car, but they are all roughly 75 millimeters off the ground in the center of the car.

The overall height of an F1 is also strictly regulated by the FiA, but there are very lenient tolerances in the overall height allowed for the car. The regulations state that the car may not be 1000 millimeters higher than the centerline of the car.

This allows each F1 car to be a slightly different height, but it also means that F1 cars are not much more than 1 meter tall. This is incredibly low for a vehicle. The low height of an F1 car is important for aerodynamics and maximizing the performance of the car.

Why Are F1 cars So Low To The Ground?

Formula 1 cars are some of the lowest racing cars in the world. The height of the car in every dimension is vital, but what exactly makes it so important.?

The easy answer is that F1 cars are so low to the ground to keep the center of gravity of the racecar as low as possible and to improve the aerodynamics of the vehicle.

Improved aerodynamics and a low enter of gravity translate to significantly more car control and much higher cornering speeds than would otherwise be possible. A low center of gravity means that the car is less influenced by external forces and is more stable when driving and tighter when cornering.

Improved aerodynamics means that the car has better downforce, which also improves cornering speeds, reduces drag, and drastically improves the overall performance of the car.

A large factor in the high performance of these vehicles is the design of the car and how air moves over it when racing. The ride height, ground clearance, and overall height of the car all make a significant difference to how well the racecar will perform in an F1 World Championship season.