How Many Bikes Can A MotoGP Team Have? 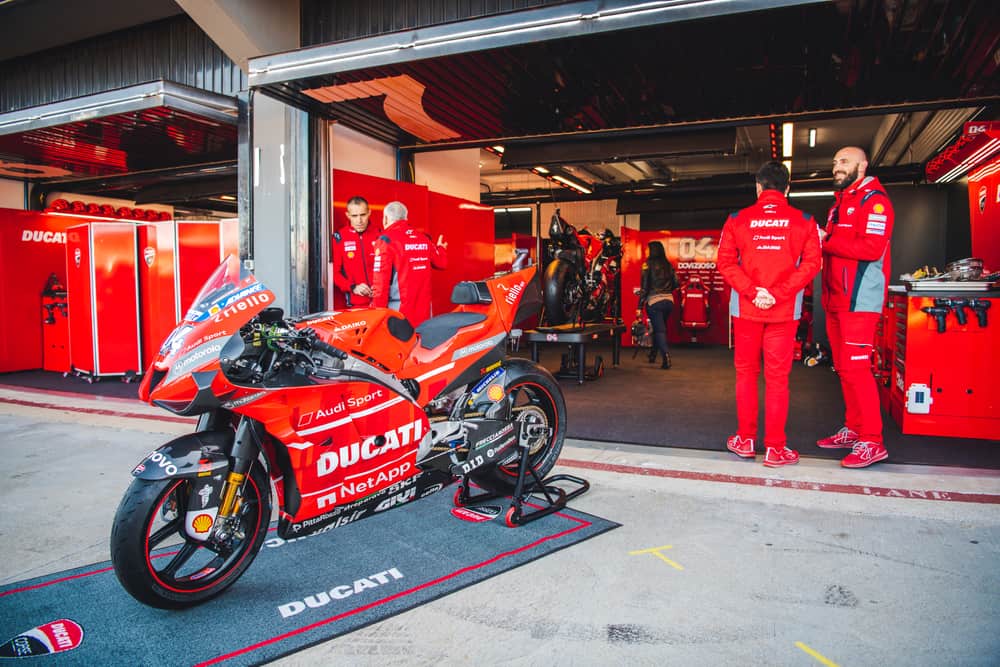 The 74th season of MotoGP started on 6 March 2022, with 24 riders from 12 teams competing for the world title. If one considers that the bikes used in the MotoGP are not factory bikes but heavily customized prototypes, each costing more than three million US Dollars, you may wonder just how many bikes a MotoGP team may have.

Each MotoGP Team can enter four bikes in a race, two for each rider. Usually, each rider would only be allowed to use one motorbike per race, but where the race starts dry, and it starts raining during the race, the rider may switch to an identical bike set up for wet conditions.

However, the number of bikes a team can have are not limited to the number of motorbikes they can enter in a race. Teams need bikes for various purposes, including testing and developing new technology for the next season. As the bikes are also customized to suit the rider, it would make sense for the team to have replacement bikes ready, should one be badly damaged during a race.

How Many Bikes Would A MotoGP Team Use?

Although a MotoGP team is limited to entering two bikes per rider into a race, they are not limited in the number of motorbikes used for other purposes. However, to truly understand how many bikes a MotoGP team could have, it is essential to first consider how MotoGP works, along with some of the rules of MotoGP, specifically relating to the bikes themselves.

For the 2022 season, six manufacturers, or constructors, are participating in the MotoGP: Aprilia, Ducati, Honda, KTM, Suzuki, and Yamaha. Each of these constructors has a so-called “factory team,” a team owned by the constructors themselves, and they may supply their technology to one or more independent or satellite teams. Currently, Aprilia and Suzuki don’t supply to any satellite teams.

Each constructor has a test team working on developing and testing new technology for the next season. The test team would also use several bikes from the previous and current seasons in the development process. These test bikes would feature the same technology as the racing bikes. However, teams may not make technological improvements to their bikes during the season.

What Type Of Bikes Would A MotoGP Team Have?

Although MotoGP teams have the names of some top motorcycle manufacturers, and some are even called factory teams, the bikes used in races are not mass-produced. Prototype bikes are customized to the rider, making it possible for the specific rider to perform at his best. These bikes are so customized that a rider would not be able to go fast on his teammate’s bike.

Each rider gets allocated seven identical engines per season, with a maximum capacity of 1000cc. The constructors develop these engines, which must adhere to the governing body’s capacity, bore, and power specifications. All the bikes used by all teams are fitted with the same electronic management system and Michelin tires.

The reality is that regular motorcyclists, even experienced ones, would most likely not be able to take one full lap on one of the MotoGP bikes. The extremely high speed, astonishing power, lightning-fast acceleration, and sharp braking would make it almost impossible to stay on the bike, not to mention the slick tires, which would not give any traction unless they were very hot.

The test teams usually use the previous year’s bikes and the latest bikes to work on developing the bikes for the next season. These test bikes are also prototypes and would feature all the same technology used by the racing bikes, including the electronic management system and Michelin tires. Although these bikes might not be as customized as the racing bikes, they are still not factory bikes.

The governing body of MotoGP encourages constructors to make the latest technology available to their satellite teams as well. Although the increased competition might not be ideal for the factory teams, the advantage of doing this is that the constructor has more riders on their latest technology, assisting them in improving their bikes for the next season.

How Many Riders Does A MotoGP Team Have?

For the 2022 season, 12 teams compete in MotoGP, with two riders each. The reality is that each team must carefully consider the riders they contract. They must pick riders that would complement their bikes and get the best out of them. Although most teams would love to have riders who can go fast and win races, there are several other factors to consider.

Riders need to know motorcycles and racing well and need to be able to communicate issues and requirements effectively with their support teams, enabling them to make the necessary adjustments to the bike that would allow the rider to perform better. This is especially true during the pre-season testing phase, where teams are allowed to make adjustments.

Some teams could choose two riders with similar riding styles, making their bikes more compatible. Others might prefer to have one super-fast rider with a second rider who is better at testing, giving feedback, and helping to improve the bike’s overall performance. Another option would be to have two riders with different strengths and weaknesses that complement each other.

During pre-season testing, the riders will provide feedback to their support teams, compiling data that the team needs to sift through to find the ideal bikes for the coming season. This process could take time, and every decision made by the team is bound to benefit one rider more than the other. Having more than two riders would further complicate the process.

With two riders and a maximum of two bikes allowed per rider per race, each MotoGP team may enter a maximum of four bikes per race. However, each team would also have several bikes from the previous and current seasons, used by their test teams to develop and test new technology for the next season.