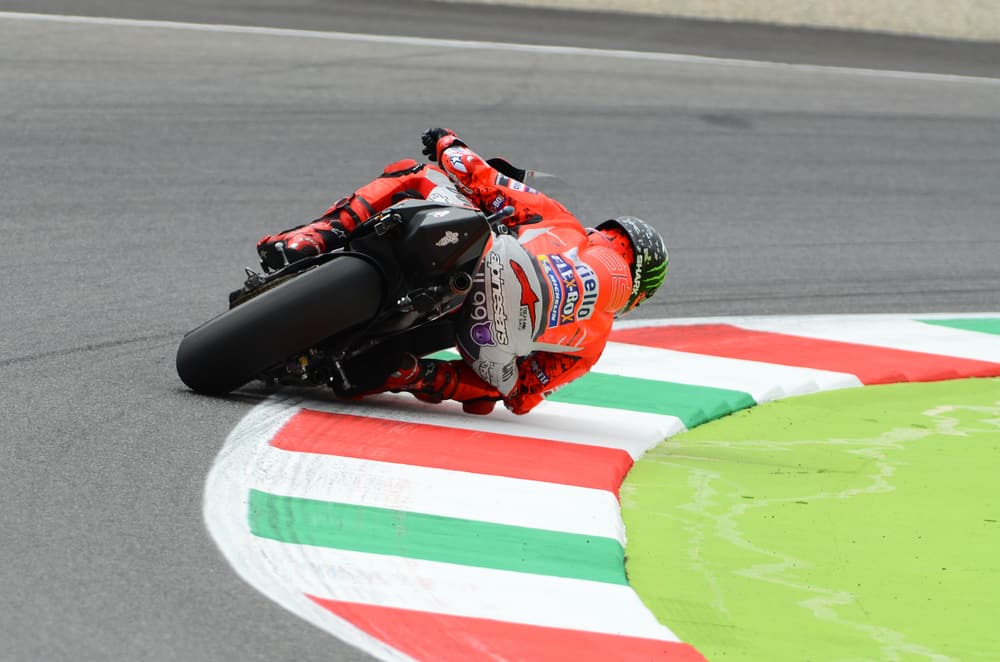 The two-wheeled motorsport of MotoGP is fast-paced and thrilling to watch. While watching, I noticed significant differences between the bikes, especially when comparing their exhausts. Some have pipes on the side and others at the rear. So this got me pondering on why MotoGP bikes have two exhausts.

Most MotoGP racing teams use twin exhaust systems on their bikes, but a single exhaust may also be used. The exhaust system on a MotoGP bike is designed to be extremely lightweight and assists with increasing engine power. The system also aids the rider with braking and cornering.

Read on to discover why the twin exhaust is commonly used, how it assists the rider with braking and what components are not installed on the system.

What Are The MotoGP Rules For Exhausts

The rules stipulated in the 2022 FIM MotoGP sporting regulations for motorbike exhausts are really vague. This allows the manufacturers a lot of free rein when it comes to designing an efficient racing exhaust system. The 2022 Sporting regulations state the following:

1. The outlet of the exhaust must not extend behind a line drawn vertically through the edge of the rear tyre.

2. For safety reasons, the exposed edge of the exhaust pipe outlet must be rounded to avoid any sharp edges.

Do All MotoGP Bikes Have Two Exhausts?

There are 3 main types of twin exhaust configurations that can be used on a MotoGP bike, these are:

The sporting regulations for MotoGP state that variable-length exhausts are not allowed. This makes it a bit trickier for a twin exhaust system as both sides must be of equal length. This will result in one of the exhausts having an extra bend or multiple curves compared to the other side to make up for the engine’s length. The new high-tech exhaust being very short can add slight complications.

How Does a MotoGP Exhaust Provide Better Performance?

Exhausts have been modified from simple basic metal pipes that guide the gases out of the engine into a system that affects engine power, torque, and how it is delivered. The exhaust not only helps the rider during acceleration but also assists with braking.

New exhaust valves or flow restriction devices can create negative engine torque when the throttle is closed. This, in turn, slows the rear wheel and reduces the braking force required by the rider. The exhaust system can aid the riders when it comes to cornering at high speed.

When the rider closes the throttle at the right moment, the negative torque effect will compress the suspension. This changes the geometry of the whole bike, allowing for a faster and more precise handling feel.

The power differential achieved between a single or twin exhaust will depend on how the exhaust is tuned. Exhausts are all about fluid dynamics and how to expel the most burned fumes out of the engine while creating a vacuum in the cylinder to suck in more air and fuel (scavenging).

Generally, it will be very hard to distinguish which exhaust makes more power, as each MotoGP bike is set up and tuned for ultimate performance. But, the way the power is delivered and at what RPM it delivers is more easily noticed.

A single exhaust will deliver the optimal torque at a higher RPM compared to a twin. The torque will come in fast and fierce, and then it will drop off. This is noticeable when the riders are short shifting in the entrance of a corner. The twin exhaust delivers torque at a lower RPM and maintains a more manageable, linear power curve, allowing riders to take corners in a higher gear.

Again, the power difference is not in the horsepower amount but in how the power is applied to the rear wheel.

Does A Twin MotoGP Exhaust Weigh More Than A Single?

The average weight of a MotoGP exhaust system is 14,95 pounds (6.75kg). The exhaust is manufactured from lightweight titanium and magnesium. A single exhaust will have high-diameter piping and a large single exit pipe. The twin exhaust will have slightly thinner diameter pipes with significantly smaller exit pipes. So, the weight variance between the two is less than one and a half pounds.

Do MotoGP Bikes Use Catalytic Converters and Mufflers

The MotoGP exhaust is all about weight saving. Using a catalytic converter will add extra weight to the system and significantly reduce the engine’s horsepower output. The tuning characteristics of the exhaust are reduced if there is a catalytic converter, as readings will change as it heats up, making the setup unpredictable.

The great sound that emanates from a MotoGP bike at 150mph is a unique trait of the sport. But the bikes do not use mufflers in the traditional sense. The piping and pressure wave dynamics of the whole exhaust system reduce the harmonics that are emitted. This can drop the decibel level down from 128 dB to the 115 dB that we all love.

The MotoGP FIM Sporting Regulation does not state that a MotoGP bike must use a twin exhaust system, so some teams use a single exhaust system. The power difference between a single and twin exhaust is minimal, and it is instead how the power is brought to the rear wheel.

MotoGP exhaust systems have come a long way, from heavy metal pipes to the new lightweight titanium performance systems. The exhaust system has advanced to the point that it assists the rider with braking and high-speed cornering.