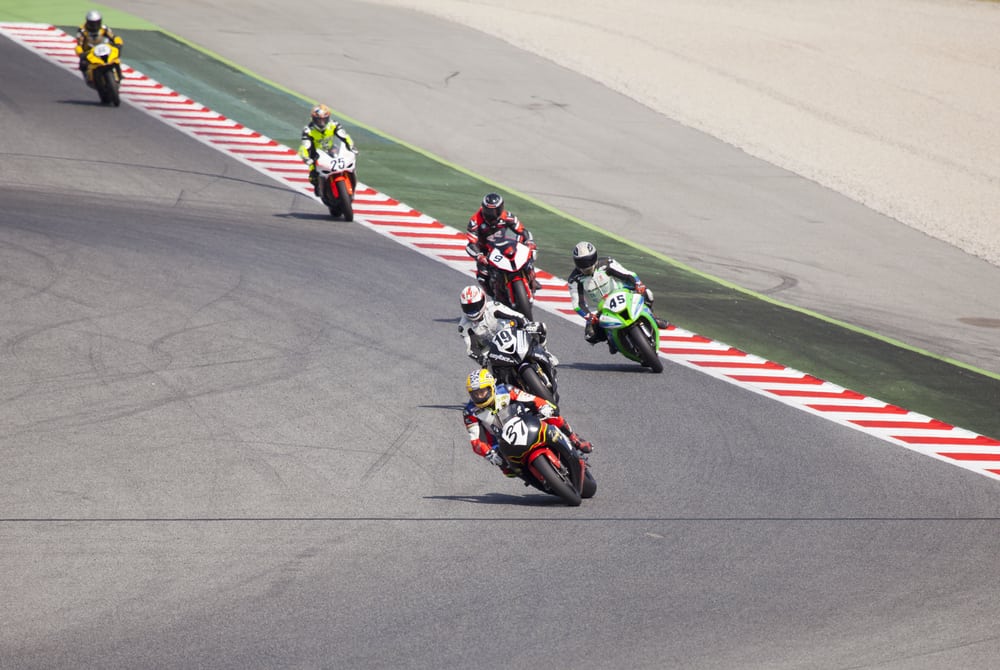 MotoGP is the premier bike racing series in the world, with the racing machine reaching speeds of 217mph and lean angles only professionals can attempt.  MotoGP bikes are fast, loud, and very agile on track, but are they stock?

A MotoGP bike is not stock but is considered a prototype racing bike.  MotoGP bikes have carbon fiber chassis, wheels made from magnesium, lightweight suspension, seamless transmissions, and an engine producing over 300 hp.  They do not have headlights, indicators, a kickstand, or a starter motor.

Read on to discover the similarities between a MotoGP bike and a stock bike, what make a MotoGP bike so fast, and what are these racing machines made from.

Is A MotoGP Bike Similar to a Road Bike?

A MotoGP bike is the top-tier motorcycle in the world.  They are prototype racing machines with the best components, the lightest parts, and tires that stick like chewing gum.  All this is put into a compact package to reach speeds above 220mph.  MotoGP bikes are built for one reason: to outperform their rival teams and win races.

Comparing a MotoGP bike to a standard road bike will provide some visual similarities, but that would be it.  MotoGP bikes are not stock motorcycles but are more comparable to a Formula 1 race car than other road bikes.  So, what makes a MotoGP Bike so special?  Let’s break it down.

MotoGP bikes are prototype racing machines with millions of dollars invested in their design.  But there are components on a stock bike that are not required on a MotoGP racing machine.  MotoGP does not race at night, so there is no need to install headlights.  This saves weight and allows for a modified front-end faring.

MotoGP bikes will not be used as quick run-round bikes, so there is no need for indicators or a side stand.  The bike will be placed on a paddock stand when it is in the pit.  Keeping the bile on a proper paddock stand will keep the weight off the soft slick tires, which can get flat spots if they are not rolling.

There is no starter motor or kick start installed on a MotoGP bike.  This is all to save as much weight as possible, so the bikes are started with a paddock starter.  A paddock started is similar to a treadmill for the back tire, essentially push-starting the bike while it is on a stand.

The exhaust is entirely different than a stock motorbike exhaust, as there is no muffler, and it is made from lightweight titanium and other lightweight metal parts.  There is no brake light at the back of the race machine, but there is a rain light.  The rain light creates a visible blinking light seen in wet or misty racing conditions.

The main visual differences are easily noticed on a MotoGP bike when compared to a stock bike.

The tires on a MotoGP bike are possibly the most important difference compared to those found on stock machines.  It may be very surprising for fans to see how much better the racing slicks are compared to stock tires with tread.  But the fact is that they are entirely different.  The slick tires require lots of heat before providing sufficient grip levels.

The riders must keep the tire in a very narrow temperature window during the race to maintain optimal performance.  During a race, the front tire can reach 100°C while the rear can exceed 120°; if the temperatures drop too low, there will be almost zero grip.

Suppose a stock motorbike has racing slicks on, and the temperatures are optimal.  In that case, this will make the stock bike perform very similarly to a racing bike.  The slick will not last very long on normal road surfaces, but it can undoubtedly bring extra grip and performance to a stock machine for a track day.

MotoGP brakes are supplied by Brembo. Brembo now offers a complete individualized brake system for each rider.  The riders can select which type of caliper, brake disk, clutch pump, and brake pads they prefer to individualize the braking system for their needs.

The MotoGP Transmission And Engine

There is a lot of confidentiality surrounding the transmission and engines on MotoGP bikes.  The transmission is a 6-speed manual seamless gearbox with a quick shifter.  The gear selector works in reverse order compared to a stock bike gearbox, so when the rider selects a higher gear(2nd to 3rd), they will push down instead of up.  This aids the rider in the corners as they lean over on the bike.

The engines are loosely based on the road stock versions, but they have installed lightweight, high-performance parts and have been tuned for maximum horsepower.  MotoGP bikes are capable of over 300Hp from a 1000cc engine, propelling them to speeds close to 220mph.

The suspension on a MotoGP bike is simply better than the ones found on stock motorbikes but functions in the exact same way.  The racing suspension is much lighter and has better hydraulics to cope with all the extra speed and forces they will be subjected to during a race.

The racing suspension will be interchangeable with the suspension on a stock motorbike.  Although many stock bikes have electronic suspension as standard, MotoGP does not, so fine tuning will be required.

The Electronics On A MotoGP Bike

A stock motorcycle will have much more electronics in the form of rider aids than a MotoGP bike.  The stock bike electronics will have ABS, Stability control and wheelie control, electronic suspension, and more.  A MotoGP bike will have none of these(not allowed via the rules) but rather more advanced track-specific rider aids.  Examples of these aids are fuel mapping and power mapping, which can be switched through and selected between corners.

The Materials Used On A MotoGP Bike

The wheels used on a MotoGP race machine are much lighter than stock wheels.  Eight of the twelve teams in MotoGP use Marchesini-forged magnesium wheels, weighing a staggering 16.7pounds per set.  These wheels are lighter and expensive, costing around $2,700.00 per set.

MotoGP bikes are not stock at all.  They may have a few visual similarities, but that is it.  MotoGP bikes are designed to reach extreme speed and have high-power engines, lightweight parts, superior brakes, and tires.  They are intended for race track use only and will not last or be comfortable to ride on city streets.