Do Short Bikers Have An Advantage In MotoGP? 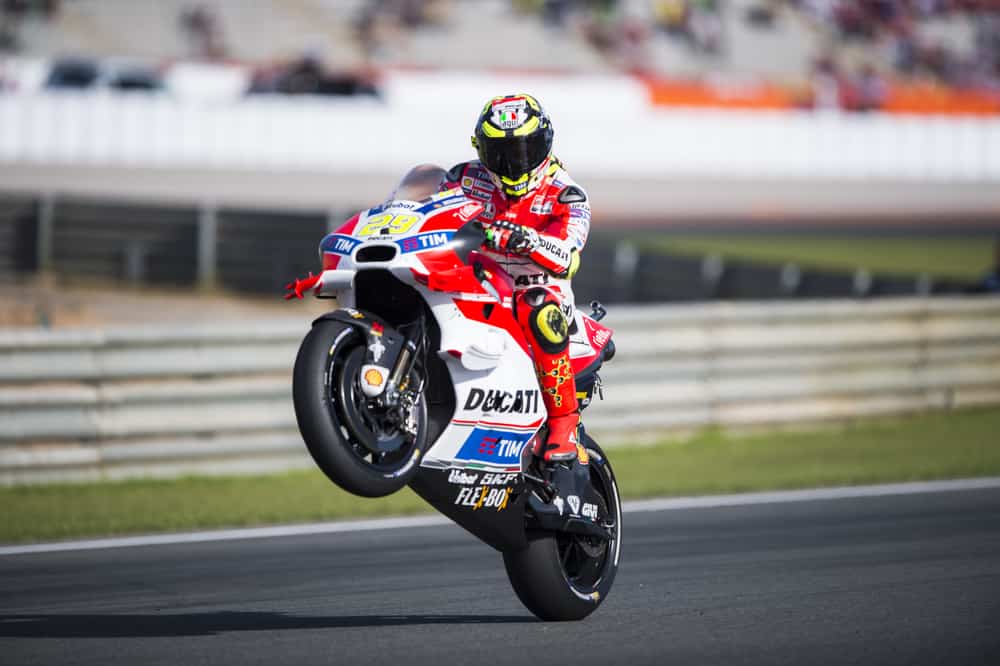 If you pose this question to Dani Pedrosa, formerly of Repsol Honda and a leading contender for the World Championship title since he joined the class until the day he retired in 2018, he would certainly scoff at the idea, pointing out that despite being the shortest rider in MotoGP for many years, he never did become World Champion in the class. Loris Baz, conversely, was extremely tall and, in three seasons, never won a single MotoGP race and did struggle to find a ride that would take his frame. He’s certain that short riders have it easier.

Short Bikers have several advantages in MotoGP, but there are also some clear disadvantages, usually seen over the length of a season. No evidence proves categorically that there is an overall advantage because of height. (Or lack thereof) Overall, short bikers do not have an advantage in MotoGP.

As in all sports that involve vehicles, many aspects of MotoGP involve a trade-off, and height/weight vs. speed is certainly up there. Dani Pedrosa raced in MotoGP for 12 years, from 2006 to 2018, and won 31 Grands Prix, but never managed to win the coveted Championship. Yet in 2012, he won more races than any other rider, including the eventual Champion, Jorge Lorenzo, who was 1.72m/5’8″ and 65kg/143lbs, compared to Pedrosa’s 1.60m/5’3″ and 51kg/112lbs.

Taken in isolation, this would indicate that the taller rider did have the advantage over the entire season but that the shorter rider may have had the advantage on a race-to-race basis.

No postulation can be formed, however, without further investigation into how exactly height (and therefore weight) affects the performance of man and machine.

How Does Height/Weight Affect A Rider’s Progress?

In a field where all athletes are supremely fit, a shorter biker is also a lighter biker. Considering this, we can see that while a light rider flying down the straight puts less strain on the bike and, more importantly, the tires, that same rider will struggle far more to control these heavy bikes, particularly when cornering, for the duration of the race.

We all know, I’m sure, that wind resistance in any motorsport is anathema, and millions of dollars are spent annually by teams of experts to ensure that their vehicle and rider have the least wind resistance possible.

A shorter rider has a clear advantage down the fast sections of the circuits, where wind resistance counts against you. Less mass translates to less drag, and thus a higher top speed can be achieved. A tall rider can only get so low over his tank, which, over a long race, can make a big difference, as this positioning will create more drag on the rear tire.

What about the corners, then? These slower sections are also affected by the rider’s height but in a very different way. In many of the turns, a shorter rider expends far more effort than his taller counterpart when climbing over the bike to change positions, both in and out of the turn. Concentration also wanes as you tire – a real issue on these pocket-rockets.

Bear in mind that a short rider like Pedrosa at 51kg / 112 lbs riding a bike that weighs 157kg / 346lbs will have far more energy output than someone like the legendary Valentino Rossi, who at 1.81m weighs 69kg / 152lbs. As the bikes are all a standard weight by MotoGP’s law of the sport, the obvious solution of giving a lighter bike to a smaller rider is not an option.

Acceleration and braking are easier on the bike if the rider is light (less mass to propel, less mass to stop), but let’s go back in time to before the race even starts…back to FP (Free Practice) 1 and 2, through which a rider has to pass, to qualify for the race on race Sunday.

How Does the Size of the Rider Affect Tire-Heat?

Tire-heat is a vital component in both the race, and in qualifying, and with only 15 mins in which to lodge a lap-time, smaller riders will have more difficulty getting sufficient heat into the tires in time. Less weight on the tires leads to less heat which in turn translates to less grip. Thus, where a taller/heavier rider might get in three or four timed laps, they choose the best. A shorter/lighter rider might only get one or two. If these laps are not good enough in the rider’s opinion, he may push too far once his tires do finally warm-up, with disastrous consequences.

Cold days are particularly bad, and a poor lap time leads to a poor starting position, which forces the rider to take extra chances to cut through the field. If race day is also cold, a short rider will take longer than the other riders to get heat into his tires.

Later in the race is where he gets the advantage back – where taller/heavier riders may well have to nurse their tires in the last 8-10 laps of a 24-lap race, a shorter rider will generally have tires in a far better condition at the same point. It will often make up sufficient ground to catch, or even pass, the leaders…hence Pedrosa’s many wins.

At 1.81m / 5’11” and 80kg / 176lbs, Danilo Petrucci is one of the tallest riders in the paddock and has stated that at the start of the average race he is very quick but sees a drop-off in efficiency in the laps that follow. He is much slower towards the end, largely due to soaring tire temperatures. This is naturally due to his size.

How Does the Size of the Rider Affect Fuel Efficiency?

Drag, friction, and tire wear are all determined by the rider’s size and contribute to fuel consumption; a shorter rider consumes noticeably less than a taller one. Since all riders are permitted the same amount of fuel, this is an added issue. Pedrosa has confirmed that his former team-mate at Honda, Nicky Hayden, had to run a much leaner setup Pedrosa to have sufficient fuel to run the entire race. You guessed it: Hayden was a little bigger than Pedrosa at 1.73m / 5’7″.

We can see from this that even a small increase/decrease in size makes a noticeable difference on the bike.

How Does Size Affect A Rider’s Season?

The shorter the rider, the more energy he has to expend to stay in control of the bike. He will become more fatigued than a taller rider of the same fitness level and is more prone to accidents as a result. This generally occurs in the bends, which are particularly arduous as you tire. The early part of the race is the worst for a shorter rider, with cold tires and a full tank of fuel to contend with: 22l / 6gals weighing 22kg / 48.5lbs.

This constitutes almost 14% of the bike’s entire weight, so as this is burned up during the race, the rider will have a lighter bike to control but will also become more tired as the laps pass by.

With 22 Grands Prix in a season, spanning just seven months, this places enormous stress on the rider’s body, and more and more accidents are seen – sometimes serious – as they near the end of their careers.

Here’s how Jack Millar sums it up: “The rest of us can manage these beasts more easily,” says the Australian. “We’ve got more weight over the top of the bike, we’ve got more strength and more leverage with our long arms and legs. Dani is short, so he’s got short arms, short legs, small hands, and small feet. Even for us, it’s a lot of hard work to try and muscle a big piece of machinery around.”

If you look back in history, the taller riders and the shorter ones share the spoils very evenly in MotoGP. Sure, Dani Pedrosa never won the World Championship, but he did come second three times, and Jorge Lorenzo, a rider not much taller, won no less than 3 times with 3 runner-up places. At the other end of the height scale, Rossi has 6 wins and 4 runners-up, but then his record eclipses that of almost all others.

Talent and bravery, skill and determination over the entire season are the attributes required in MotoGP. Size advantages and disadvantages tend to cancel one another out, and by the end of October each year, it’s the best combination of rider/team that takes the Championship.