How Safe Are F1 Cars? 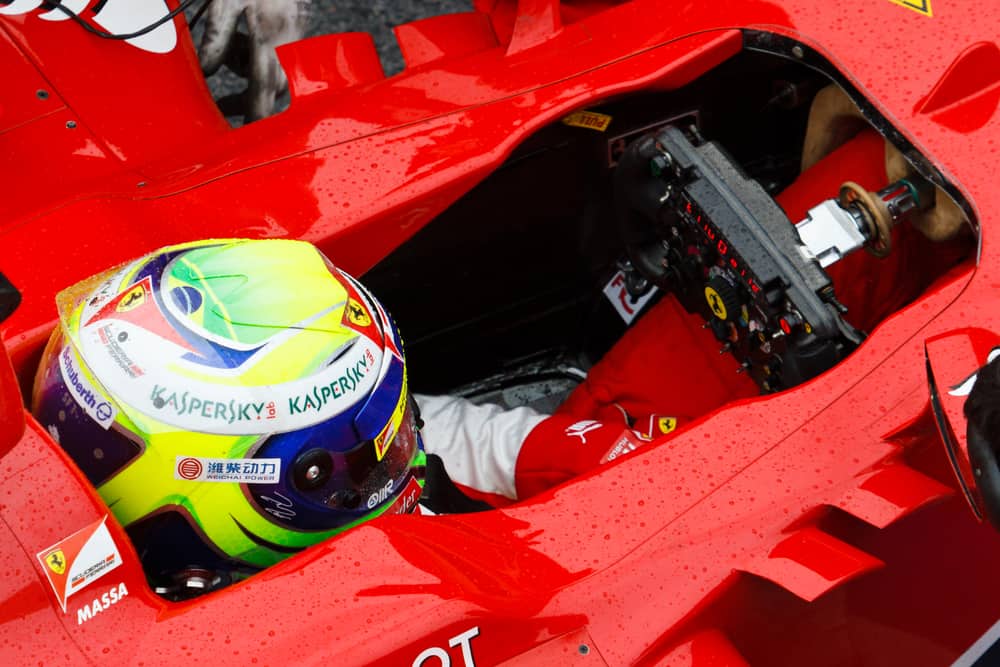 Formula 1 is constantly pushing the limits of what is capable in motorsport. The design features of F1 cars are the most advanced of any motorsport, and the engineering of these vehicles improves the motor industry as a whole. Part of the advancement of F1 cars is the increase in F1 car safety, but how safe are these cars?

The speeds that F1 cars reach, the dangerous tracks that are used in F1, and the open-cockpit design of the cars make F1 races exceedingly dangerous, but the cars are built with impressive safety features and protocols to protect the driver in every instance. Let’s take a closer look at the safety of modern Formula 1 cars.

How Safe Are F1 Cars?

The nature of Formula 1 racing is inherently dangerous. The cars in this motorsport reach incredibly fast speeds, take corners at speeds that should not be possible and accelerate at a rate that most average people would not be able to withstand.

The high speeds of F1 racing mean that every accident, crash, or collision that occurs is potentially deadly. Several drivers have died in F1 history due to high-speed collisions while racing.

The constant potential for horrific high-speed accidents in this sport means that Formula 1 engineers are constantly striving to increase the safety of the cars used in the sport. The regulatory board of Formula 1, known as the FIA, is always reevaluating car regulations to improve the safety of the vehicles.

Despite the speeds that these cars reach and the high performance they are capable of, Formula 1 cars are surprisingly safe. Very few injuries occur in modern Formula 1 crashes and even few deaths.

Modern Formula 1 cars are designed with safety in mind and have a myriad of built-in safety features and protocols to keep F1 driers as safe as possible in the event of a catastrophe.

Even compared to other types of racing cars, even cars that race at much slower speeds and employ poorer performance, Formula 1 racing cars are very safe.

The safety of modern Formula 1 racing cars is entirely due to previous incidents on the race track that inspired all of the current cars’ safety features. Modern Formula 1 cars are significantly safer than those of F1 history.

This means that every safety feature and protocol built into modern Formula 1 cars is intentional and designed to protect against very specific safety concerns. Every safety feature is a direct result of the F1 experience, which makes every feature critical and integral for the safety of the driver, rather than being superfluous and designed by theories.

F1 cars are safer than many people realize. This lack of understanding is typically due to a lack of knowledge surrounding the safety features of the modern F1 car. Let’s take the time to explore the most important safety features built into modern F1 racing cars that keep the driver safe on the track.

There are several various safety features built into modern F1 cars that keep the drivers as safe as possible in the event of any type of collision or crash.

The safety features are regulated and enforced by the FIA, and every car must conform to the safety standards upheld by the organization.

Most of the features in F1 cars are designed by necessity due to particular crash incidents. This means that every safety feature is tried and true and has been predesigned and proven to prevent serious injuries or death in the event of an accident on the track.

None of the safety measures in F1 cars absolutely ensures the full safety of the driver, but all of the features combined make for a significantly safer vehicle and keep the drivers far safer than they would otherwise be.

Among the most critical safety components of the Formula 1 car and one of the most integral parts of the entire vehicle is the safety cell. This portion of the vehicle is also known as the monocoque or the survival cell.

The safety cell is the portion of the car where the driver sits. This part of the car is built to offer the most protection possible for the driver in all hazardous events.

The F1 car monocoque is hade made from sheets of high-strength carbon fiber sheets, inter-woven with sheets of honeycomb aluminum. Each sheet of carbon fiber is twice as strong as steel and five times lighter.

There are twelve layers of carbon fiber, each incredibly thin, strong, and light. The interwoven aluminum increases strength and rigidity within the material.

The safety cell within all F1 cars is fireproof, will not burn, and weighs 35 kilograms or less.

A vital component of the safety cell is the roll hoop. This is a rigid component that forms the circumference of the cockpit entrance. The roll hoop is designed to prevent the cockpit from deforming in the event of a crash, keeping the structure of the car rigid and prevents the driver from being crushed, significantly increasing the safety of the driver.

The headrest in the Formula 1 car cockpit is padded and reinforced. The headrest is made and formed from shock-absorbing material to reduce the effect of impact on the drivers’ neck, head, and shoulders.

The sculpted headrest and headrest surround drastically reduce the risk of neck injuries, even those associated with the G-forge present when driving an F1 car, even if no accident occurs.

Part of the headrest in an F1 car is formed by the HANS system. HANS stands for Head and Neck Support. This is a system whereby the helmet and neck brace of the driver is attached to the headrest of the monocoque. This prevents head and neck movement, which protects the driver from severe head and neck injuries.

The HANS system primarily protects the driver from over-extension of the neck, which is the direct cause of most F1 neck injuries. The system also helps the driver to support their neck, head, and helmet while racing, allowing the driver more control within the vehicle.

The halo was introduced to Formula 1 cars in 2018 and has been made an integral and mandatory safety feature of all F1 cars.

When the F1 halo was first introduced, it was met with disdain from drivers and F1 engineers, but the safety benefits of the device became quickly apparent, and teams became more than happy to have a halo installed on their cars.

The halo is a titanium structure installed in front and over the driver’s head. The halo forms one of the most important safety features of the car.

In the event that the car rolls, turn upside down, or even if another car is somehow launched over the top of the car, the halo protects the head of the driver from all impact.

The halo is able to withstand up to 12 tons of vertical pressure, which is more than the weight of some double-decker busses. The halo increases driver safety by 17% and typically weighs around 15 kilograms.

The halo has been stated as being one of the most important safety features of the modern Formula 1 car and has saved the lives of multiple drivers on multiple occasions since its inception.

Another more modern safety feature is wheel tethers. The wheels of F1 cars are tethered to the vehicle with a set of steel cables.

The FIA has recently changed the regulations to state that each wheel must be tethered to the car with no less than six steel cables.

The idea behind this tethering system is to prevent the wheels from being propelled away from the car in the event of an accident. The wheels of an F1 car are heavy, and roll easily, and bounce easily, which may very turn them into high-speed projectiles if they break free from the car.

Drivers and other cars have been impacted by un-tethered wheels in the past, which has given rise to this safety feature that prevents the wheels from coming into contact with the driver or other cars on the track.

Crash protection structures are components of the body of the F1 car that is designed to absorb and diffuse the impact from a crash by crumpling on impact and breaking away from the main body of the vehicle.

These structures absorb much of the impact forces that occur during an accident or crash and allow much of the dangerous forces to be diverted away from the driver. This makes crashes significantly safer than those of previous F1 car iterations.

Every F1 car is equipped with a 6-pint safety harness. This keeps the driver securely strapped into the vehicle and prevents the driver from being moved around by the g-forces of racing.

The harness also prevents the driver from being thrown from the car in the event of a crash. The safety harness can be disengaged with one hand motion to allow the driver to exit the car very quickly in case of an emergency.

While F1 cars may look very flimsy and parts of the car look very thin, all components of the vehicle’s construction are incredibly hardy and are made to withstand significant forces.

All wings and other aerodynamic components and surfaces are constructed from extra-hard Kevlar, which makes them very tough, but also prevents the components from shattering or splintering in the event of an impact, which helps to keep the driver safe from potential shrapnel during a crash.

Modern Formula 1 cars are equipped with a fire suppression system that is mounted within the monocoque of the car. This system contains a fire suppressant that will prevent the spread of fire within the vehicle.

The system can be activated from within the car by the driver or remotely by pit crews in the event of a fire within the cockpit. This system is vital for driver safety and makes a significant difference if a fire breaks out after a crash.

There are several other safety features built into Formula 1 cars that increase the protection and safety of the drivers that operate these high-tech vehicles.

Every F1 car is equipped with a Kevlar fuel bladder rather than a metal fuel tank. This drastically increases the vehicle’s safety and helps to prevent explosions and fires.

The monocoque is lined with reinforced protective padding to keep the driver safe and secure during the race and to reduce impact forces in the case of an accident.

F1 car chassis are made from Zylon, which is a very tough bulletproof material that cannot shatter, and from shrapnel, which helps to keep the driver safe during an impact.

The truth is that Formula 1 cars are designed with safety in mind. These cars are very high-performance vehicles that operate at the pinnacle of motorsport performance, but a primary focus of F1 car design is driver safety.

Without keeping the drivers safe, there would be no sport to enjoy. Every F1 driver can confidently operate their vehicle and push their skills and abilities to the limit to draw the most performance out of the car while knowing that the safety measures built into the car will keep them safe on the track.

This allows drivers to push harder and makes racing much more exciting to watch. Without the safety features, the drivers would be much more cautious, making the races less interesting.

Louis Pretoriushttps://onestopracing.com
Previous article
How Much Do F1 Mechanics Make?
Next article
Is It Hard To Become A F1 Driver?