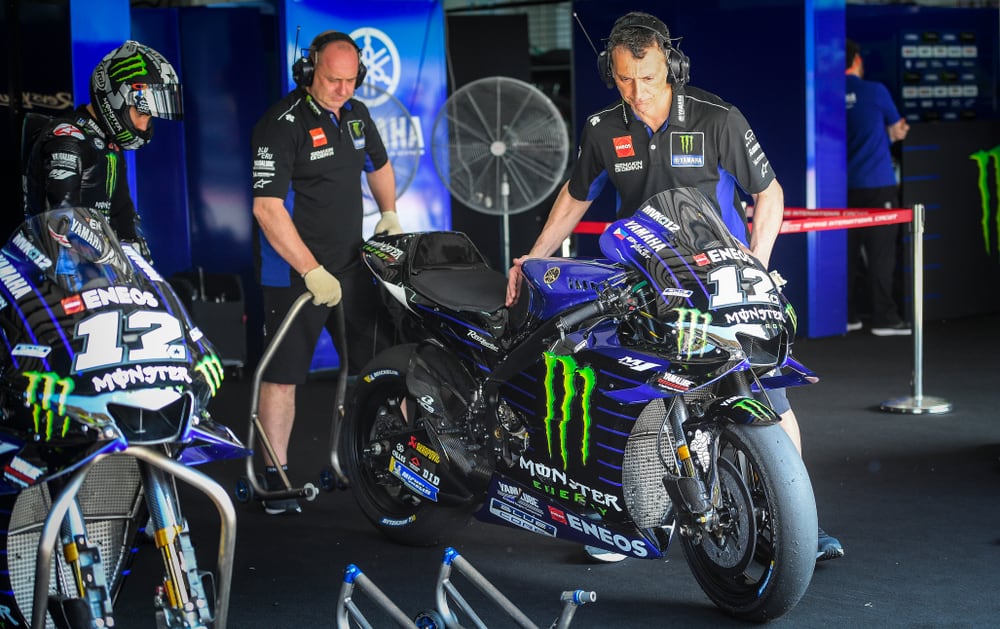 If you are a fan of MotoGP, you probably know a lot about the bikes, especially those used by your favorite team. But no matter how well-engineered a bike is or even how skilled a rider is, a motorcycle will only continue to run while there is fuel in the tank. Have you ever wondered what fuel MotoGP bikes use?

MotoGP bikes use unleaded petrol tested at 95 to 102 RON, and FIM currently allows each bike to carry a maximum of 20 liters. From 2024, 40 percent of the fuel must come from non-fossil sources, and from 2027, 100 percent must come from such sources. Such changes will drive innovation in fuel development.

MotoGP is a hotbed of innovation, extending to the fuel teams use in their bikes. While they currently use reasonably conventional fuel, subject to specific qualifications specified by the FIM, changes to the requirements for fuel mean they will be at the cutting edge of fuel development. Let’s take a look.

The body that regulates MotoGP, the most popular class of the FIM Grand Prix World Championship, is the FIM (International Federation of Motorcycling).

According to the current FIM Fuel Regulations, published on 19 May 2022, fuel companies supplying race fuels must test their fuels against the specifications set out by the FIM for particular formats of motorcycle racing.

If the fuel specifications conform to the FIM regulations, FIM issues a certificate with a batch number and test report to the fuel company. The company must provide a copy of this certificate to their client teams or riders before they participate in a race.

Section D of the current FIM Fuel Regulations gives the specifications for unleaded fuels or mixtures of unleaded fuels, category 1. These are the parameters applicable to all FIM Grand Prix formats, including MotoGP, Moto2, and Moto3.

These specifications show that MotoGP bikes use unleaded fuel between 95 and 102 octane (Research Octane Number or RON). Such fuel is equivalent to 87 octane (Pump Octane Number) fuel used in North America, i. e. not too different from an ordinary premium unleaded fuel.

Each MotoGP team may choose its own fuel supplier, provided the fuel in question conforms to the FIM specifications. As a result, we see partnerships such as Repsol supplying Honda, Castrol supplying Aprilia, and Shell supplying Ducati.

MotoGP Regulations Regarding Volume And Temperature Of Fuel

In case you’re wondering, MotoGP bikes have a maximum fuel capacity of 20 liters or 5,28 gallons at a specific minimum fuel temperature. This fuel must last for the entire race, meaning riders have to be economical in fuel use. FIM has lowered the maximum capacity over the years, from 24 liters to 22 liters to the current 20 liters.

MotoGP teams measure and adjust fuel consumption by weight rather than volume because fuel volume changes by temperature, whereas weight does not. Cooler fuel means more fuel for a given volume, with FIM allowing teams to cool fuel to a maximum of 15°C below ambient temperature before a race. No adjustments are permitted once teams have filled the fuel tank.

Teams may not pressure fuel to more than 10bar, and a maximum fuel flow rate of 50 liters per hour is permitted.

The precise specifications for fuels used in MotoGP are exacting, and FIM stipulates an official testing method for each parameter. Fuel is tested at Intertek (Schweiz) AG, a Swiss laboratory based in Schlieren, Switzerland. If you have questions about testing FIM fuels, you can contact this laboratory at fimfuels@intertek.com.

As indicated in the table, the reported values do not include the tolerance, calculated according to ISO 4259 and used to correct the minimum and maximum thresholds.

Only specific oxygenates are permitted, namely:

Particular maximum concentrations of naphthenes, olefins and aromatics classified by carbon number are specified, while bicyclic and polycyclic olefins are not allowed. The following table shows the maximums permitted:

The fuel may not contain any substance that can undergo an exothermic (energy-releasing) reaction in the absence of oxygen. This prohibition ensures that the fuel is suited for an internal combustion engine and is not “rocket fuel.”

In addition to these chemical testing parameters, the fuel must pass a visual inspection. The fuel must be clear, bright, and not contain any solid matter or undissolved water.

Changes Are Coming To MotoGP Fuel

To improve sustainability and environmental friendliness, FIM is changing the rules for MotoGP fuel, and from 2024 a minimum of 40 percent of the fuel must come from non-fossil sources, with 100 percent of the fuel coming from such sources by 2027. This move comes after Formula 1 has also undertaken such a switch.

Such fuels would either be biofuels or synthetic fuels. If they are biofuels, they must be produced from non-food sources or municipal waste, and if synthetic, they must be synthesized from carbon dioxide and hydrogen. In both cases, fuels must be created using 100 percent sustainable energy and be capable of working in an unmodified petrol engine.

Although engineers understand very well how fossil fuels combust, e-fuels, biofuels, and synthetic fuels burn and behave in markedly different ways. These differences mean that such fuels are currently not optimized for performance in the same way that fossil fuels are.

Motorsport requires optimum combustion efficiency to convert as much energy as possible from the fuel source to the lowest possible lap time. As a result, using these green fuels in MotoGP will enable engineers to test their characteristics and optimize their performance.

The non-fossil fuels developed for use in MotoGP could one day find general use in internal combustion engines, which emphasizes the critical role of this format of motorcycle racing as a test bed for innovation.

One possible outcome for MotoGP is that fuels will be modified from race to race to suit the requirements of a particular circuit rather than remaining the same throughout the season.

MotoGP bikes use conventional high-octane unleaded fuel, but changes are coming from 2024. These changes will see the fuel gradually change to be completely non-fossil in origin, with potentially enhanced characteristics. We envisage an exciting future for the competition!

Louis Pretoriushttps://onestopracing.com
Previous articleWhat Engine Does KTM Use In MotoGP?
Next articleWhy H2R Is Not Used In MotoGP?

What Engine Does KTM Use In MotoGP?